Sheba's Story
Hardly anyone who has Cavaliers stops at one dog. They are utterly addictive, and once you have one you start wanting another.
When Rowley was 1, I started looking for another Cavalier. Again I found one through the local paper, but this puppy came from the West Midlands, a little town called Lye, near Dudley.
Her breeder liked dark coloured dogs, and specialised in breeding tricolour and black and tan Cavaliers. Sheba was a tricolour bitch, but she was far from conforming to the breed standard. She was very timid, and had a severe underbite. I still knew little about dogs, and didn’t have enough knowledge to realise how far Sheba was from being an ideal example of her breed. But she was very loving and loyal, and soon became my devoted companion, which she remained for the rest of her life. 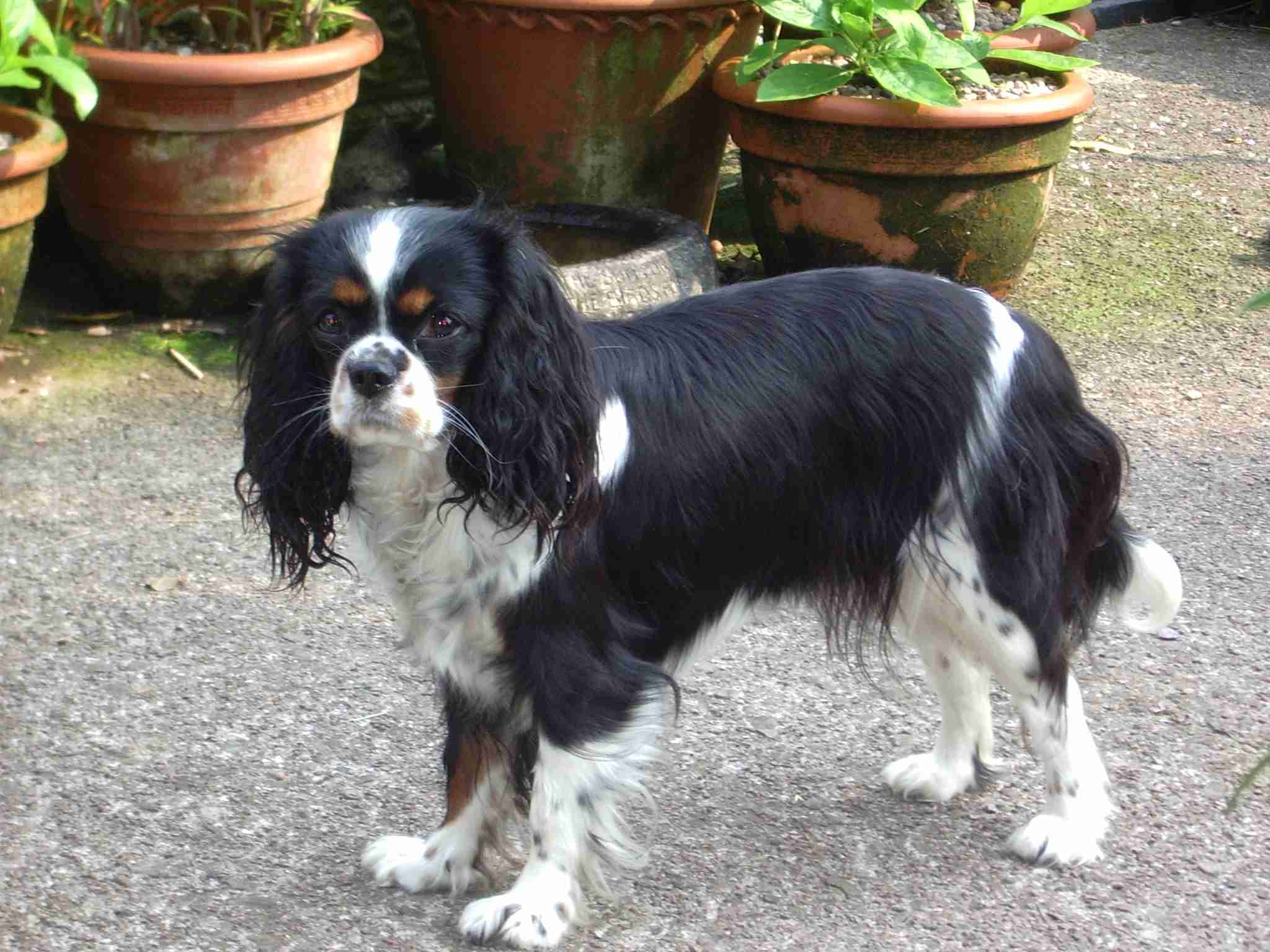 Sheba aged about 2
Two months after Sheba came, she was joined in the family by her aunt Cleo, the mother of Milly and 12 other puppies. So by the summer of 2003 there were 4 dogs in the family; three Cavaliers and Tigga the terrier.
Sheba remained the shy and timid dog she had been from the start. She seemed to have no desire for motherhood, and showed little interest in either Tigga’s or Cleo’s puppies. She was also fastidious, and kept her seasons deeply secret. As she was unsuited to breeding anyway, it was no doubt for the best.
Sheba was very good with the sheep and lambs, though, and even played sometimes with the lambs when they were smaller. Unlike Milly, who had to be taught, Sheba never chased the lambs, and they soon became quite unafraid of her. 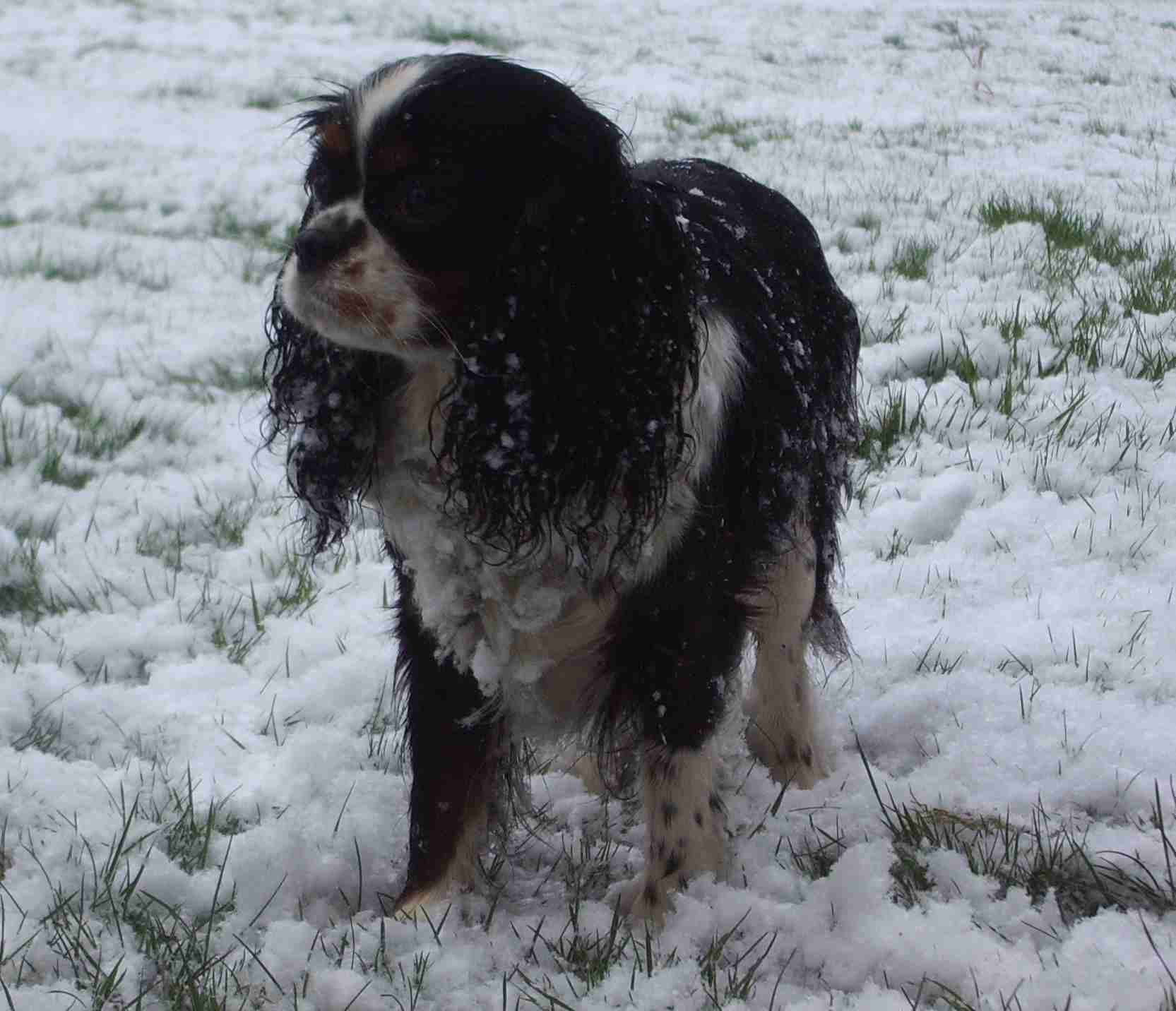 Sheba aged 4
Like Rowley, Sheba was affected by MVD; but, luckier than him, only one side of her heart was affected.
She was only about 4 when a heart murmur was first detected. But unlike Rowley, who had a persistent cough as well as fluid retention and wastage; the only outward sign she ever displayed was mild breathlessness on her walks. Every year, when she had her annual check-up, the murmur never seemed to get any worse.
Then one morning in 2014, not long before her 11th birthday, she seemed unwell; not her usual self. She was uneasy and restless. I felt her mouth, which was unnaturally cold, so I knew what was coming.
I spent the morning trying to soothe her, but around midday she lay down in her bed beside the other dogs, and curled up next to them. Less than 5 minutes later she was dead. 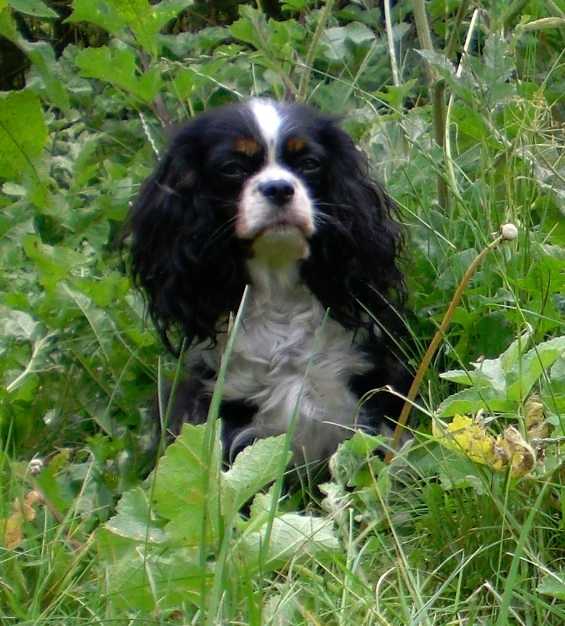 Sheba
20 April 2003 – 6 March 2014
I buried her next to Rowley, and planted another lilac to mark the spot. When we moved later that year, we left them together, in the garden of the house where they had died, and the countryside where they had spent their lives. The new owners promised never to disturb the graves.
Rowley’s birthday was 24th April; Sheba’s was 20th April. Both of them died in the spring. Every springtime we return to Shobdon Hill, our favourite walk, to see the bluebells blooming in their memory. Every year there are more of them; they become more prolific. By 2018, they had spread far and wide from the top of the hill, throughout the woodland. 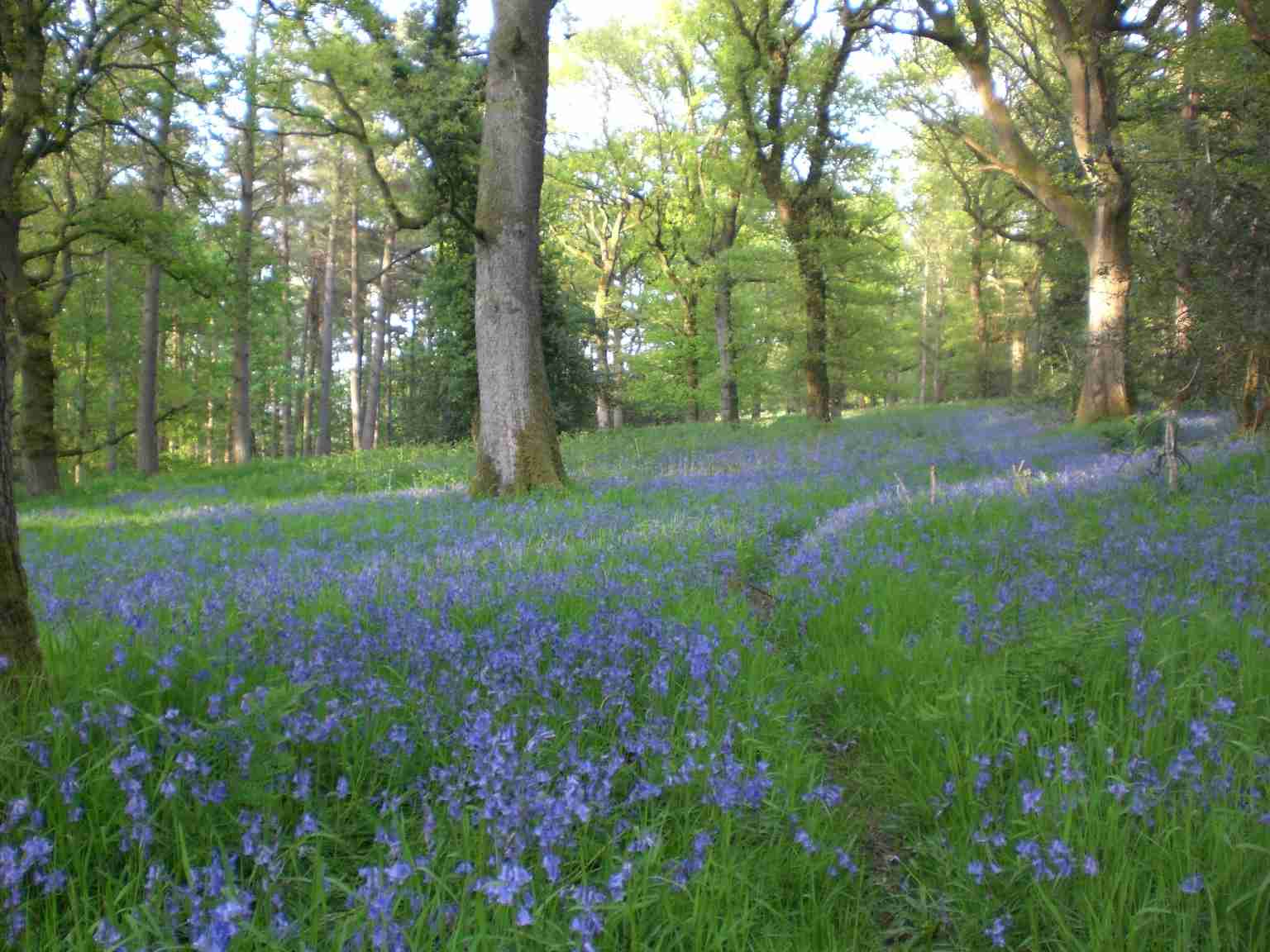 The Shobdon bluebells
After my experiences with Rowley and Sheba, I realised the importance of breeding healthy dogs who were less prone to suffering their health problems. Today all my dogs are DNA health tested, and have clear hearts and eyes, as do their parents.
error: Content is protected !!