Amber was the second puppy in Milly’s last litter, and like her sister Dylan she was delivered straight onto the floor, as Milly was still too big to lie down (she did after Amber’s birth). Both were large, healthy puppies who took to suckling quickly and flourished.

Amber at around 4 to 5 weeks

I had never had winter puppies before, and I wouldn’t be keen on having them again. Usually I would have the puppies in the garden as soon as they were mobile, but winter weather is too cold for young puppies, and in the 2017/8 winter there were few mild days, and most of those were wet. It meant that she couldn’t go outside until she was 8 weeks old; old enough to be able to regulate her body temperature and big enough to run around and keep warm. Flora, who didn’t leave until she was 10 weeks old, played outside with her. It made the house-training much more difficult than it had been since Rowley and Tigga’s day.

Amber was confident, playful and naughty. She was intimidated by nothing, and was only kept in order by Poppy (Milly was too soft to discipline her). She was a virtually solid ruby, although at birth she had a tiny triangle of white hairs on her chest.

Amber among the Shobdon bluebells

Amber was my first ruby since Rowley the best dog, and in recognition she was given his mother’s name. She has a heritage to live up to.

Amber at about 3 months

At six months Amber was still quite unreliable when it came to housetraining, and even at a year she still had the occasional accident overnight. At this age Amber was still an adolescent; her coat although feathery is not fully developed, and she still behaves like a puppy.

Amber at around 6 months

Throughout the previous six months she had been walked separately from Milly to discourage her from picking up Milly’s habit of barking at everything. She loved her walks, and unlike Poppy never strayed too far from me in pursuit of pheasants.

Amber just before her first birthday

She and Poppy have become great friends and play together all the time.

Despite my efforts Amber is inclined to be shouty, although not as much as Milly and in a different way. She was very immature and puppy-like even at two years old, and I thought motherhood might help her to become more confident. I felt sure she would be very good at it (just like granny Cleo who she so much resembled) and I wasn’t disappointed.

As it was too early to keep a puppy I decided to send her to Milly’s boy Calvados for another litter of Cavapoos. Amber became pregnant on the first mating and at first I thought she was probably carrying 4, or at most 5 puppies. She carried them high up which often makes the bitch look small in pregnancy and deceives you into believing the litter is smaller than it really is. Amber surprised us all by having seven red Cavapoo puppies, 2 boys and 5 girls.

Amber with her 2 day old puppies

Unlike Milly, whose milk was always slow to come in, Amber was producing milk a week before she whelped, and she continued to produce ever vaster quantities as the puppies grew. The little monsters took ruthless advantage of her and continued to suckle greedily right up until they left, by which time Amber was sagging so badly I wondered if she would ever regain her figure (she did). I gave her more food than I had ever given a lactating bitch before, eventually more than 4 times her normal diet, but even so she became much too thin (although she recovered quickly after the puppies left). 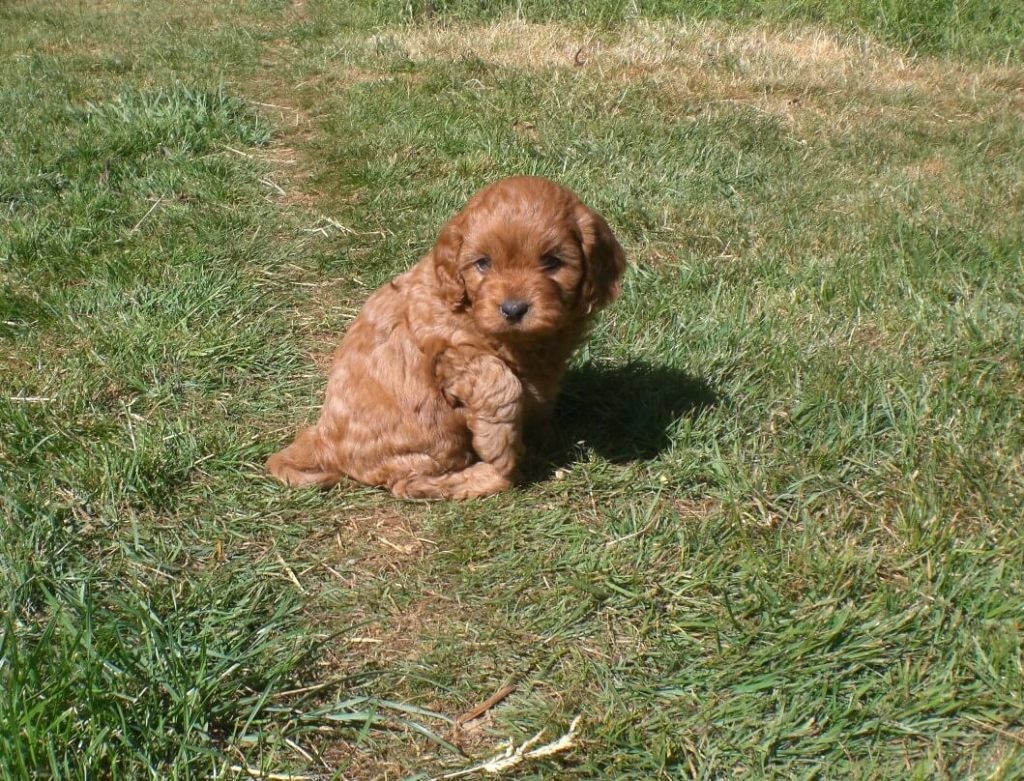 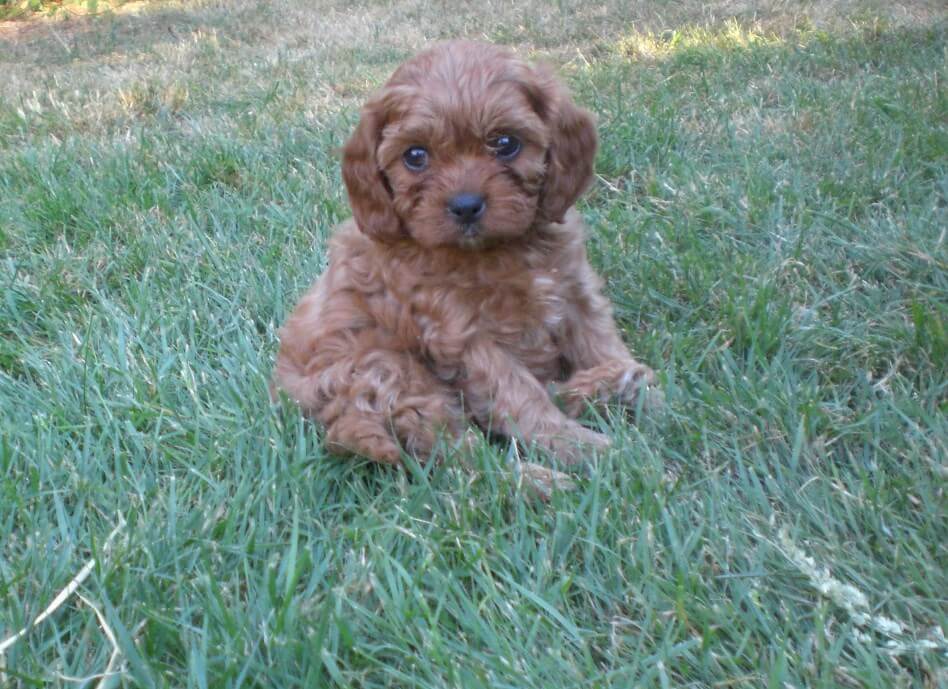 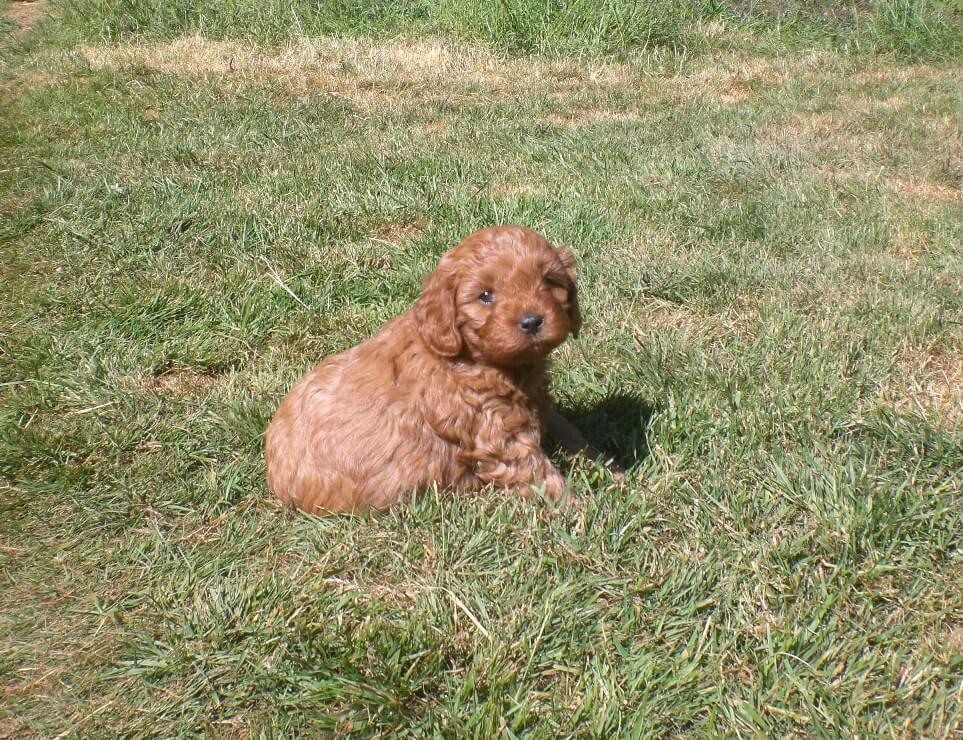 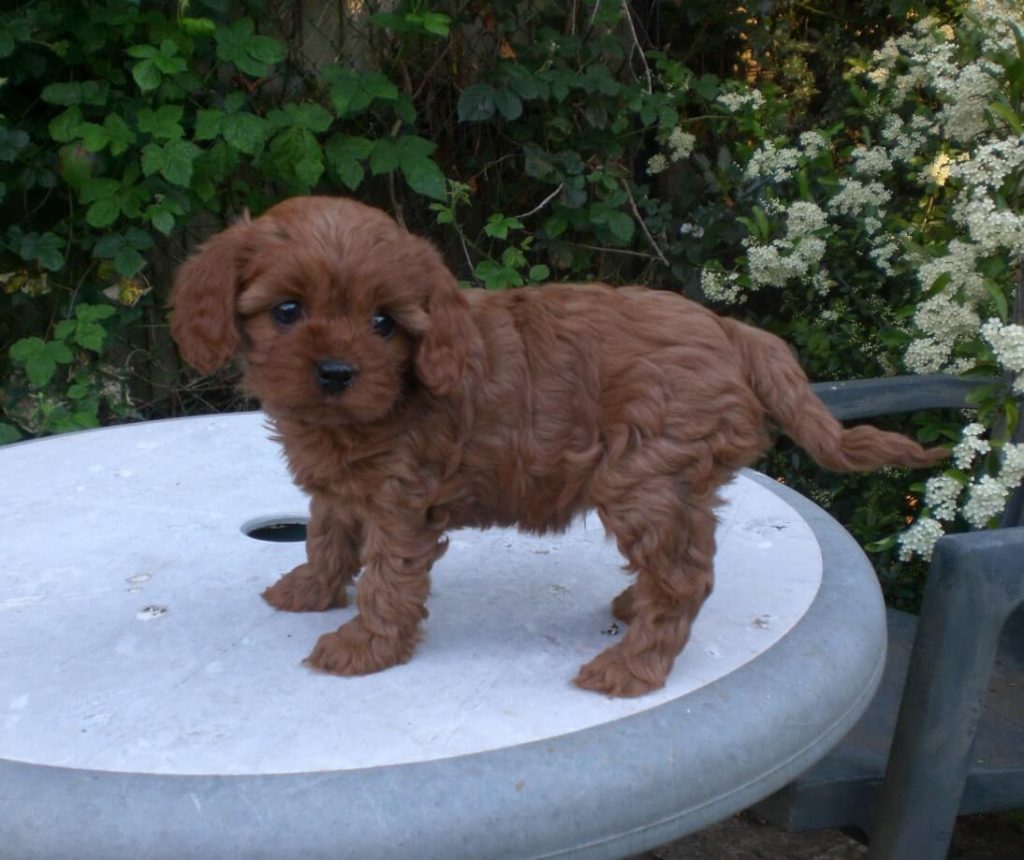 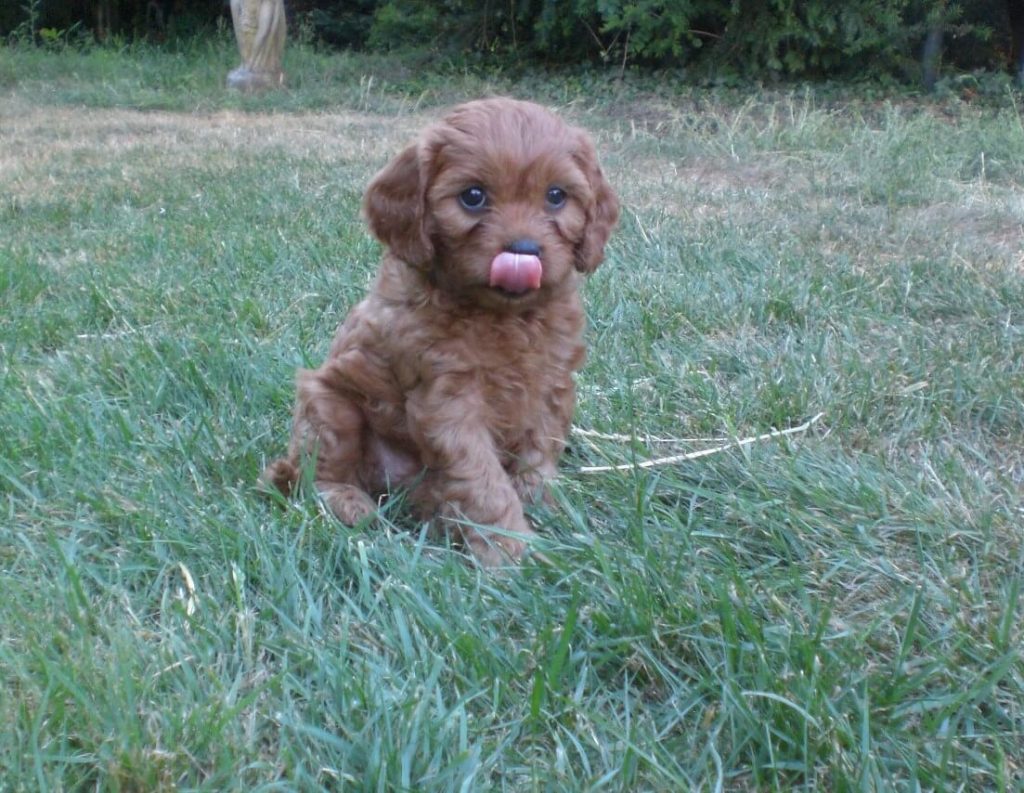 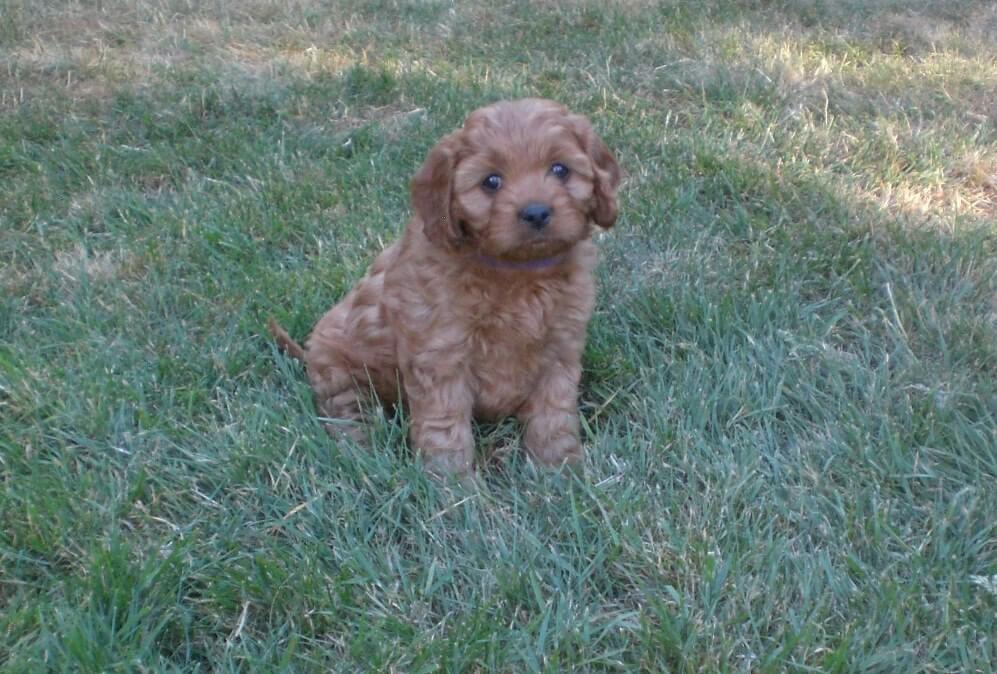 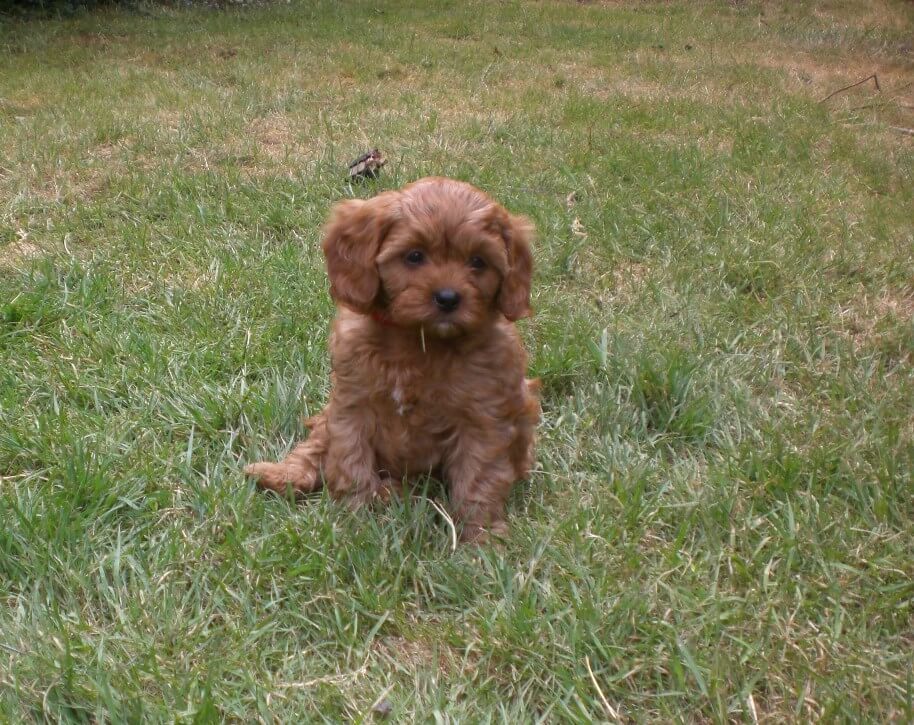 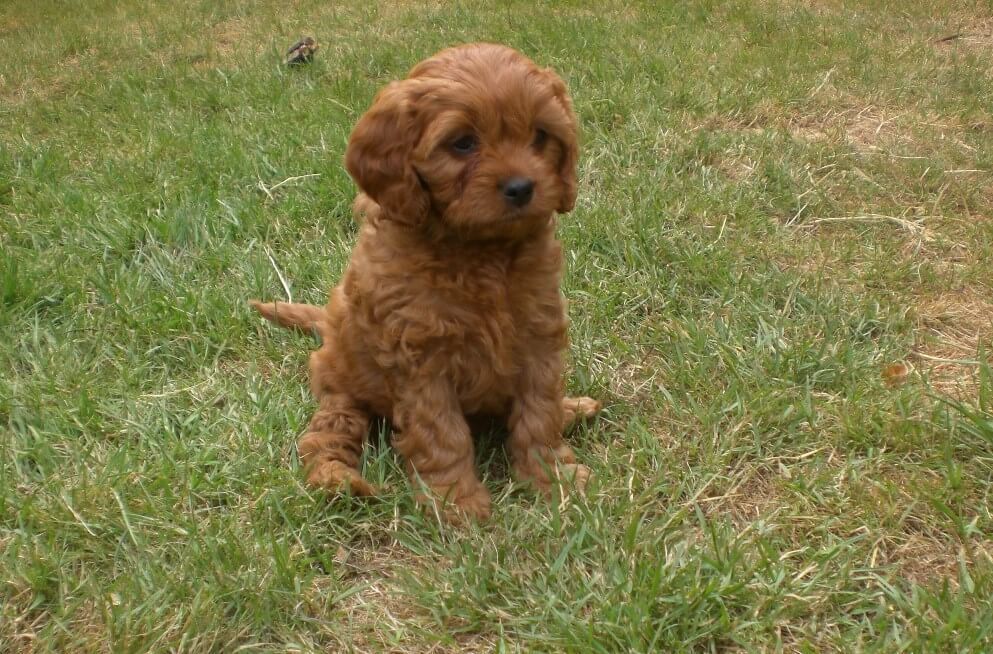 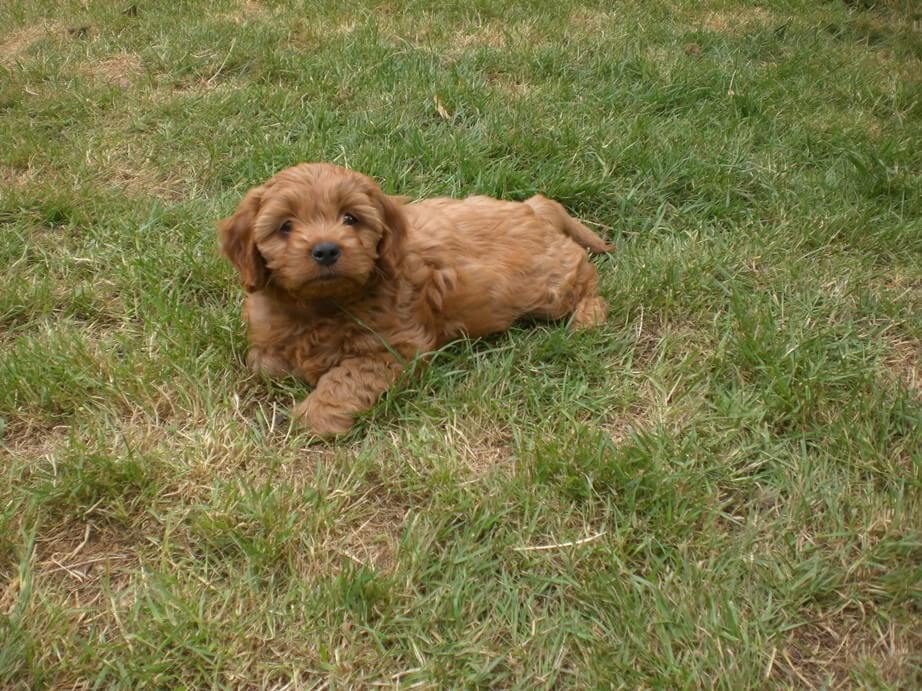 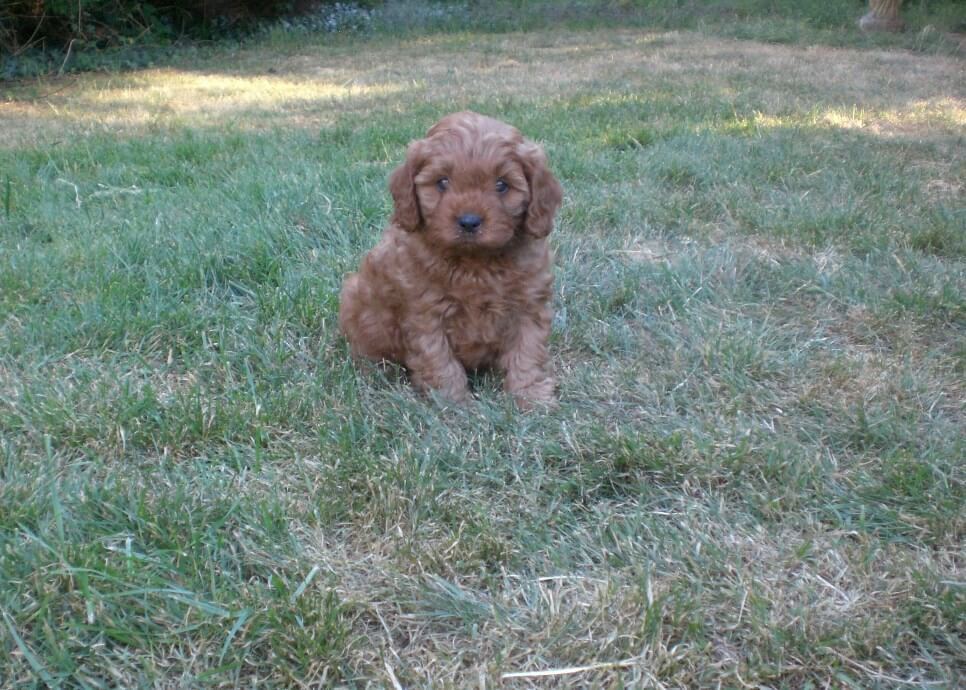 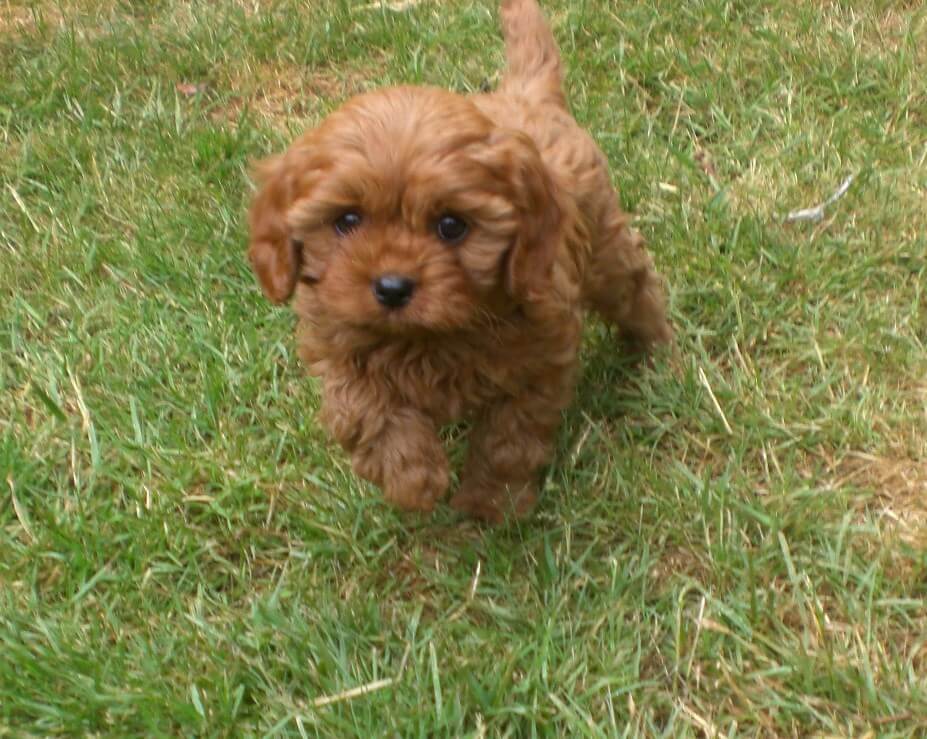 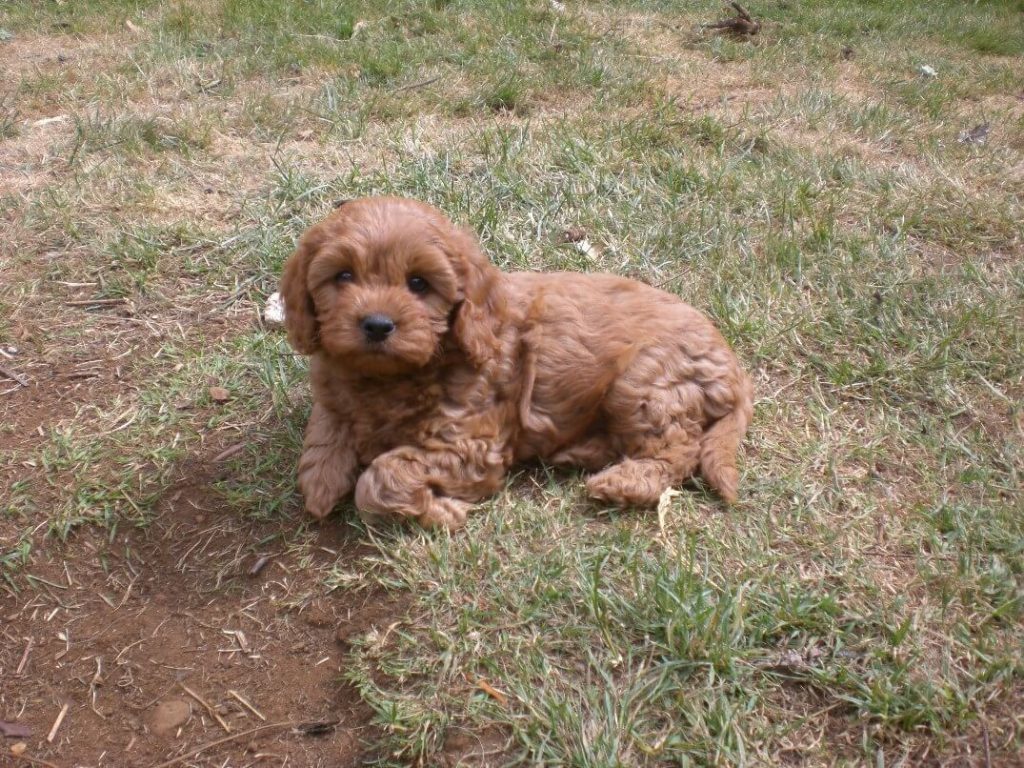 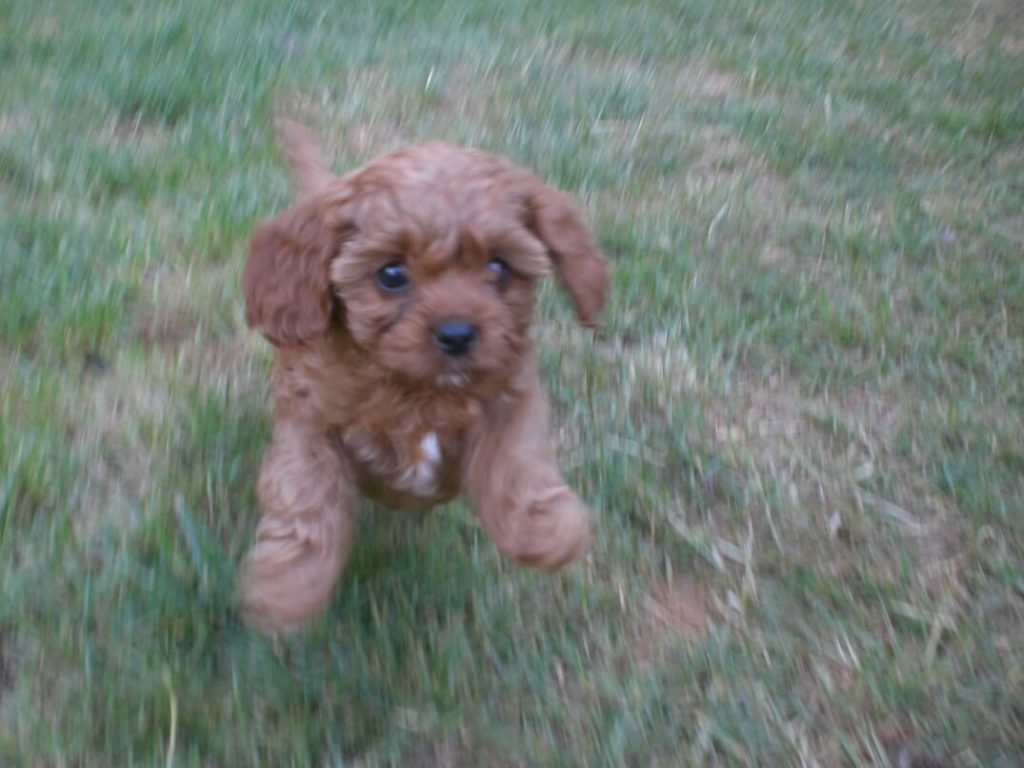 The puppies aged between 5 and 7 weeks

The puppies were gorgeous and very playful and being summer puppies spent much time in the garden. Tess (only 6 months old when they were born) loved playing with them and had great fun teaching them to be naughty.

They also learned to be very good.

Becoming accustomed to going outside regularly throughout the day they made very little mess inside and continued to do well at their housetraining in their new homes. Tess missed them badly when they left and spent several days being exceptionally naughty, even for her.

But she recovered and is now 11 months old and thick as thieves with Amber.