Cleo was the younger sister of Sheba’s mother and came to live with us a couple of months after her. She was an unusual puppy for her breeder, as she was Blenheim, with beautiful regular markings and the coveted Blenheim spot.

When I first met her, at her breeders house, she was very shy and hid under a chair – in fact, I hadn’t even realised she was there! We brought her home at 9 weeks and she settled in quickly and gained in confidence. Rowley’s laid-back friendliness did a lot to make her relax, and I probably underestimated how strong a bond she formed with him; partly because Tigga was so exclusively devoted to him too.

Cleo was the most beautiful dog, with an extraordinary depth of colour in her ruby markings. And at this age, the contrasting colours of her coat were very clearly defined. They were also beautifully even, and were crowned by the highly desirable Blenheim spot, which has been prized since the 17th century.

As she grew older, her markings gradually became less precise, until by the age of 13 they had almost begun to merge.

Cleo approaching her first birthday. These pictures, together with the ones with her puppies, show Cleo at her most beautiful, aged between 1 and 2

She grew up beautiful and gentle, and with a charming innocence about her that sprang as much as anything from the fact that she wasn’t the cleverest of dogs. People were often deceived by her gentleness into thinking her malleable and easily led, but she wasn’t. Underneath her sweet exterior was a stubbornness that made it impossible to get her to do anything she didn’t want to do.

Like all the dogs when they were young, she ran too fast and too far ahead on walks, and she was encouraged by her partner in crime, Rowley’s friend Tigga. She was also an enthusiastic water dog, and loved swimming in the local Herefordshire rivers.

Cleo swimming (with Rowley) in the River Lugg beneath Shobdon Hill, aged 1

In 2005 when she was almost 2 she was mated to Jack, another Blenheim who lived in rural west Herefordshire, near Hay Bluff and the Black Mountains.

Father of the puppies

Jack was a shorter-legged dog than Cleo, which made the mating a bit tricky. But he was a lovely, friendly dog with a luxuriant coat, who gave Cleo 7 fine, healthy, beautifully marked puppies. Jack was also great-grandfather to Cassie, Poppy’s mother.

In May 2005, in front of the drawing room fire, she whelped a litter of eight puppies, all Blenheims, starting at around nine in the evening and ending around three. One of the bitches had an umbilical hole in her stomach and died within 24 hours, but the others thrived.

Cleo with her 4-week-old puppies in the garden

Although at 4 weeks weaning has started and the puppies are eating scrambled eggs and weaning paste, they remain keen to suckle as long as their mother has milk, and as long as she will let them!

As soon as the puppies were mobile, I would take them out into the garden, where they could learn to walk much more easily with the good grip they could get on the grass; and also learn good house-training habits from observing and copying the adult dogs.

They gained knowledge and confidence from being introduced to a wider world at a young age.

Cleo was a devoted mother, and cherished her puppies. Being Blenheim Cavaliers, they were given royal and Churchillian names. They all grew up strong and healthy, and went to homes in and around Herefordshire and London. Cleo was such a soft touch as a mother she was still nursing them at 12 weeks, when Winston, the last puppy, went to his new home. 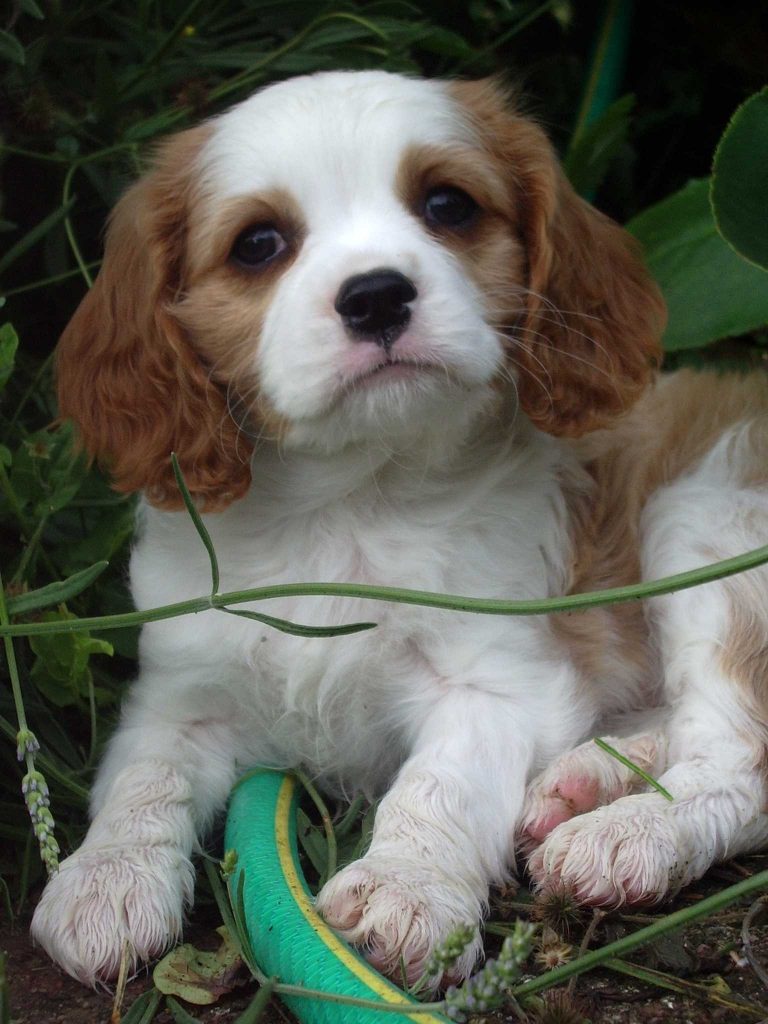 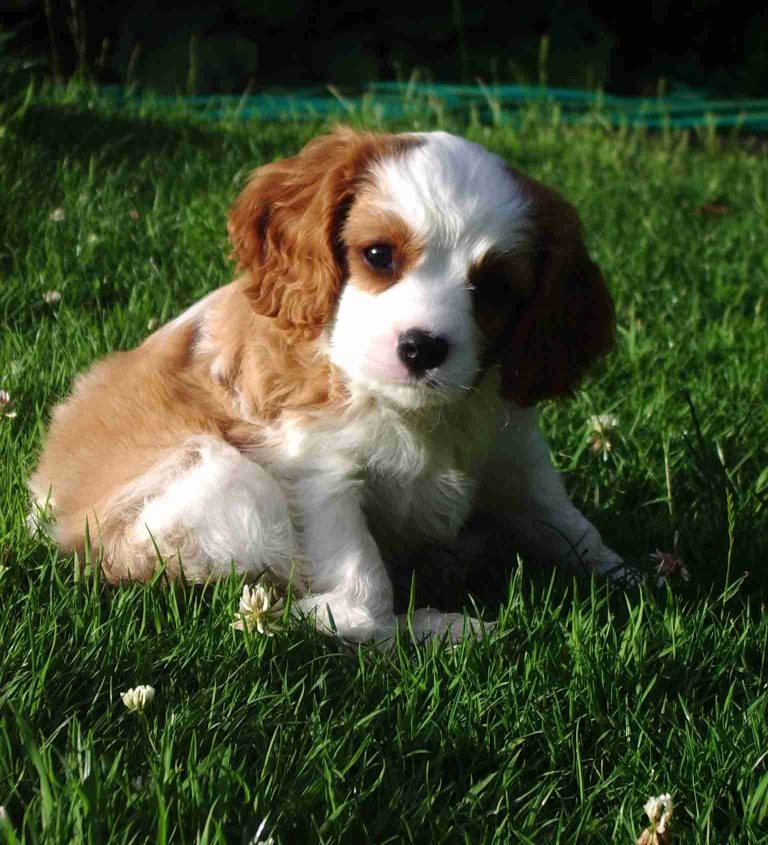 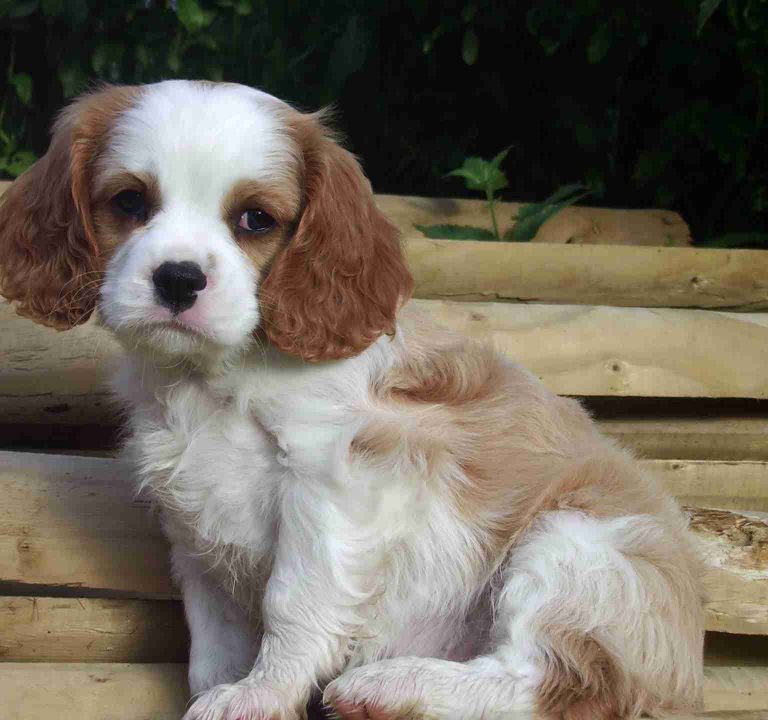 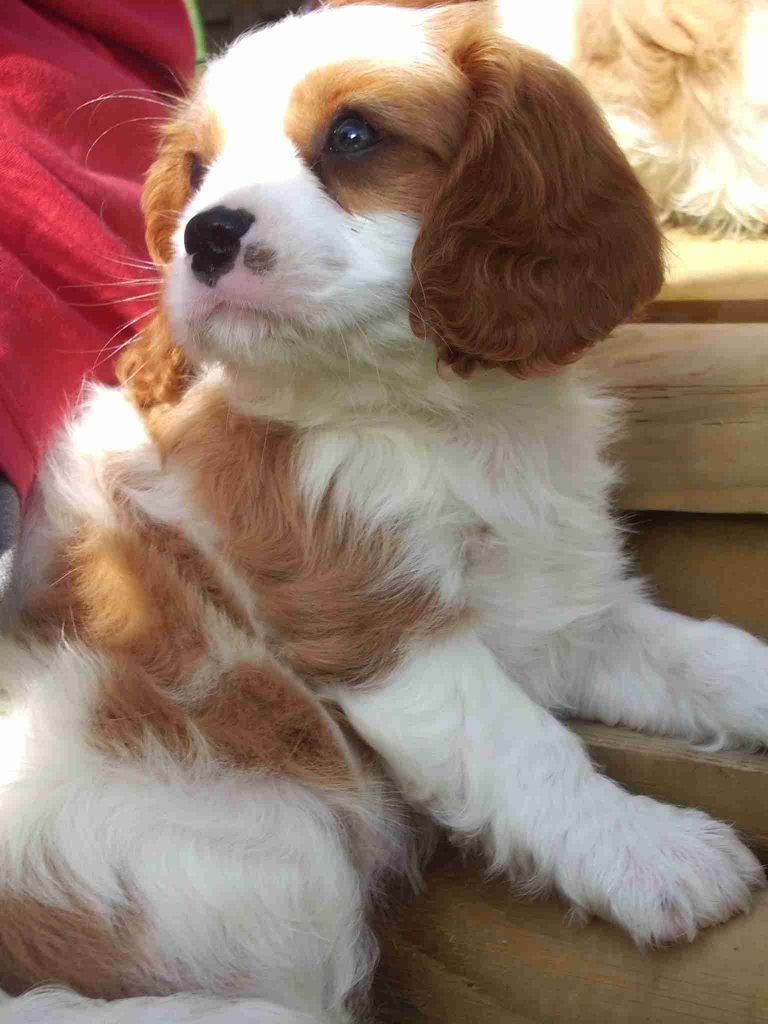 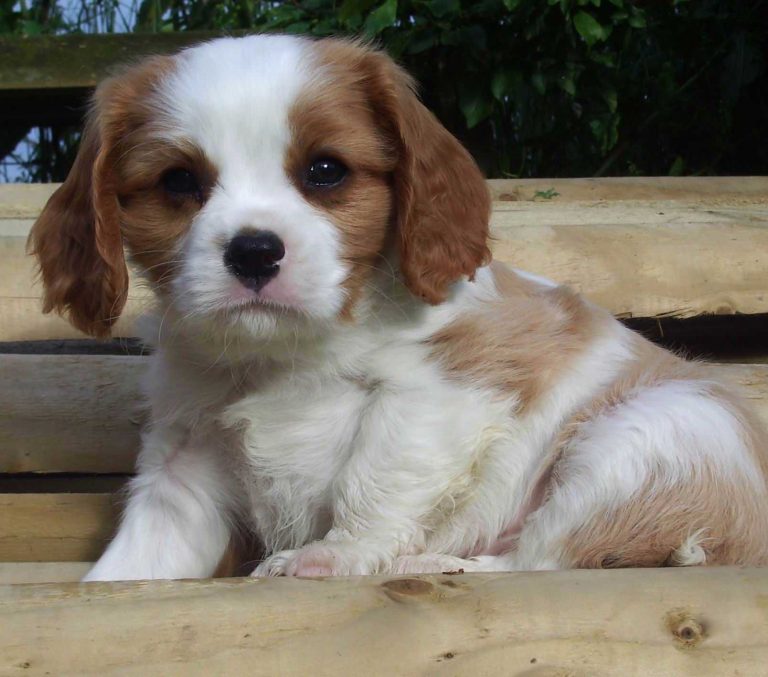 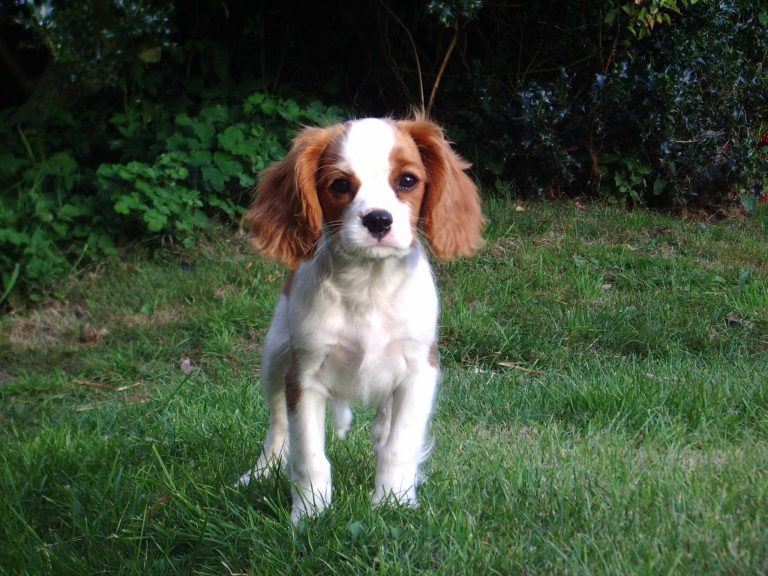 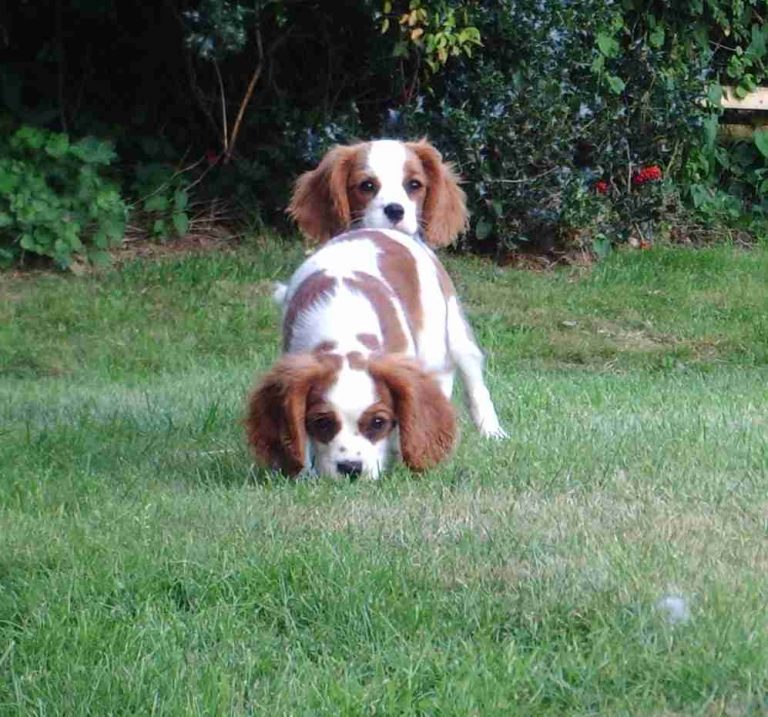 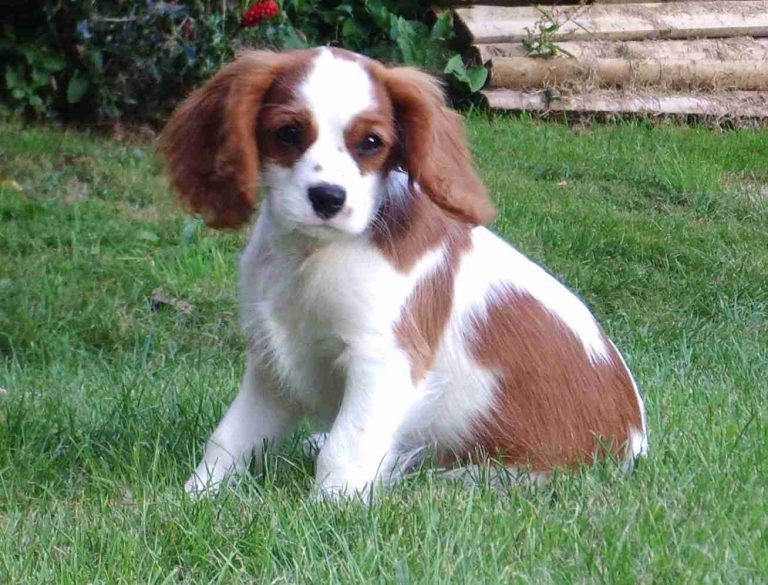 A mating in early 2007 failed to take, and in September of that year we went to live near Kington, close to the Welsh border and to Presteigne, where Rowley was born. We took our flock of Ryeland sheep, and the dogs spent much time tending them with me in the fields. Rowley sometimes caught rabbits (he was the best hunter in the pack), and Cleo would then wrestle with him for her part of the catch. She could be very determined when rabbit was at stake.

Cleo with Conan and Milly

They were born 11 days before her eighth birthday, allowing them to be registered under Kennel Club rules. Once again Cleo proved a devoted mother, and the puppies thrived.

Conan the Black, Wellington and Milly, aged about 5 weeks

They quickly became used to the sheep and lambs, and spent their first weeks meeting that year’s lambs, watching the shearing and playing in the fields.

Cleo’s six puppies at about 8 to 9 weeks

They all went to homes in various parts of Worcestershire, except a beautiful black and tan bitch, Milly, who I kept.

Cleo was a devoted granny to Milly’s first two puppies. Once Milly would allow her to approach them, she would stay with them devotedly when Milly had run off somewhere to play. She played with them, washed them and let them chew and bite her, and pull at her long ears.

But she was too old to take an interest in the litter born in 2016. She had had health problems for about 18 months by then, with recurring urinary infections for which no amount of tests could discover the cause. But she could still manage astonishingly long walks (10+) miles for a dog of her age, until she began to struggle in the heat of the summer of 2016. Within 2 months she had stopped going on walks altogether.

As she aged, the pristine markings on her head and body became less clear-cut, and her pearly white coat gradually dimmed to a colour between cream and caramel.

Today Cleo does little except potter around the garden and sleep beside me as I work on the computer. Her age is finally catching with up her; she is very stiff in the mornings and sometimes unsteady on her legs. It will be a terrible day when we finally have to part with her.

It is now 9 months since we lost Cleo.

By the beginning of this year she was beginning to age faster. Her back legs became weaker, and she moved so slowly that I ended up having to carry her outside. I was faced with the dilemma with which anyone who has cared for an ageing dog will be familiar: was it time to face up to having her put down? Then I would see her looking at me with an expression which seemed to say “You’re not going to kill me, are you?”, and I could only think “No, sweetheart, of course I’m not”. She still ate her food, albeit slowly, and seemed happy enough living her quiet, tranquil life.

Then one morning last February, I came downstairs to find that she had suffered a stroke or seizure during the night. She was beyond reach, unable to eat, drink, stand or do anything for herself at all. But her valiant heart continued to beat, and might yet go on for days, leaving her to die slowly through dehydration. I had never before had to make the decision to have a dog put to sleep, but now the choice had been made for me. It was time to help her on her way.

It took nearly 2 full minutes for her heart to stop beating. Afterwards I brought her home and buried her. She was well into her fourteenth year. I planted peonies and a blue hibiscus on her grave.

Milly often reminds me of her mother now; in ways I never noticed when Cleo was still with us. The way she stands, her expressions, and most of all the funny way she wags her tail, is Cleo personified; like an echo in time.

And now Milly’s daughter Amber is bringing back more memories of Cleo. Like Cleo, she is gentle, loving and a touch intellectually challenged. She is also the most loving and lovable of dogs, even by Cavalier standards. She has Cleo’s eyes too, and her expressions; along with the family tail-wag.

Cleo lives on, in both of them.