Milly's Story
Gorgeous Milly, the image of her handsome father, was always going to be the puppy I kept. Her sister Mistletoe, sweet and gentle, lacked her personality. The white on her head gradually disappeared as she grew, and by adolescence her head was uniformly black and tan, and she had only a smidgen of white on her chin, with more on her chest.
Cleo had been as indulgent with this litter as she had with her first. But after Milly’s brother Conan left, even Cleo decided that enough was enough. That evening, when Milly tried to suckle, Cleo kept dancing away from her. Milly had to accept that the milk was off – permanently.
[envira-gallery slug="milly-3-months"]
Milly aged 3 months
Unlike her mother, Milly had never been close to Mr Rowley. She was less than 2 when he died, and his death meant little to her except that now there was no longer a best dog – and she had no doubt about who was going to replace him.
Milly had all Rowley’s beauty, charm and exuberance, so she was a natural successor to him. She has never displaced him – no-one could – but in time she became the nearest thing to the new best dog. 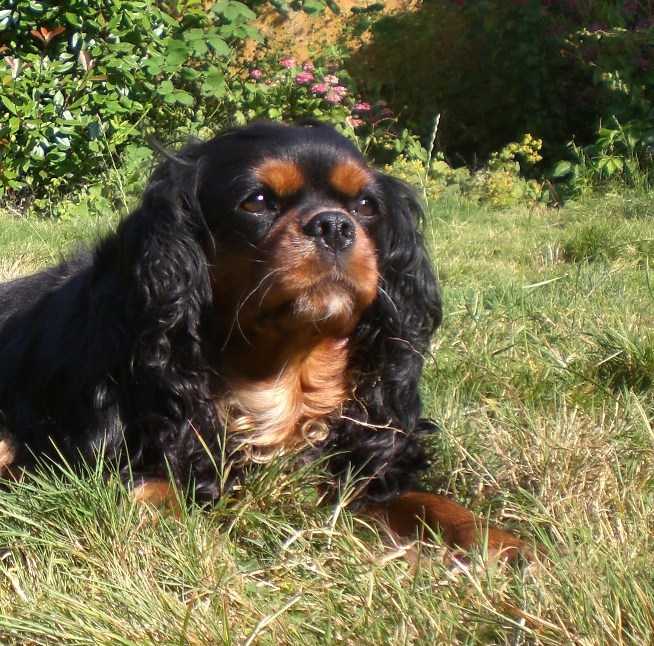 Beautiful Milly
But Milly had one tiresome fault – she was annoyingly shouty. Whereas Rowley’s bark had been as rare as the Lutine bell, Milly, always quiet at home, marked every person, dog, car, gate and stile she met on walks with a volley of barks. 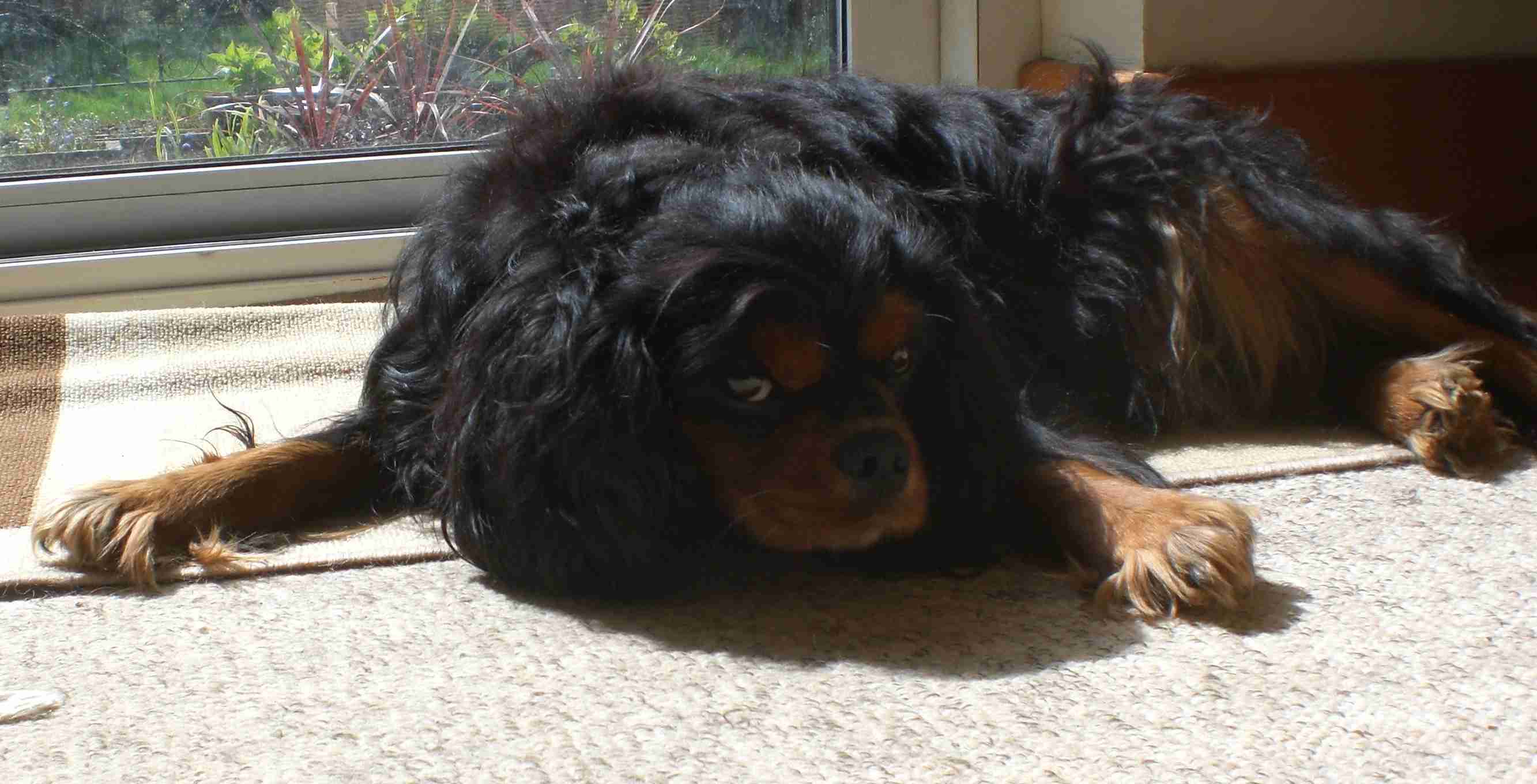 Milly looking gorgeous and wicked
She also thought lambs were there to be chased, and it took some time to teach her otherwise. But although it’s now more than 4 years since she lived with sheep, she has not forgotten her early lessons.
In 2013 she was mated with Teddy, a handsome ruby dog from the Potteries. The timing must have been amiss, because only one puppy resulted; a ruby bitch called variously Isis or just Poppet.
[envira-gallery slug="isis"]
Isis aged 5 weeks
A devoted mother when Isis was tiny, Milly soon grew bored with motherhood; and allowed Cleo to fuss over the puppy. Isis grew up to be very pretty. She went to live in Wales, near Machynlleth in the Dovey valley, and was given a Welsh name. 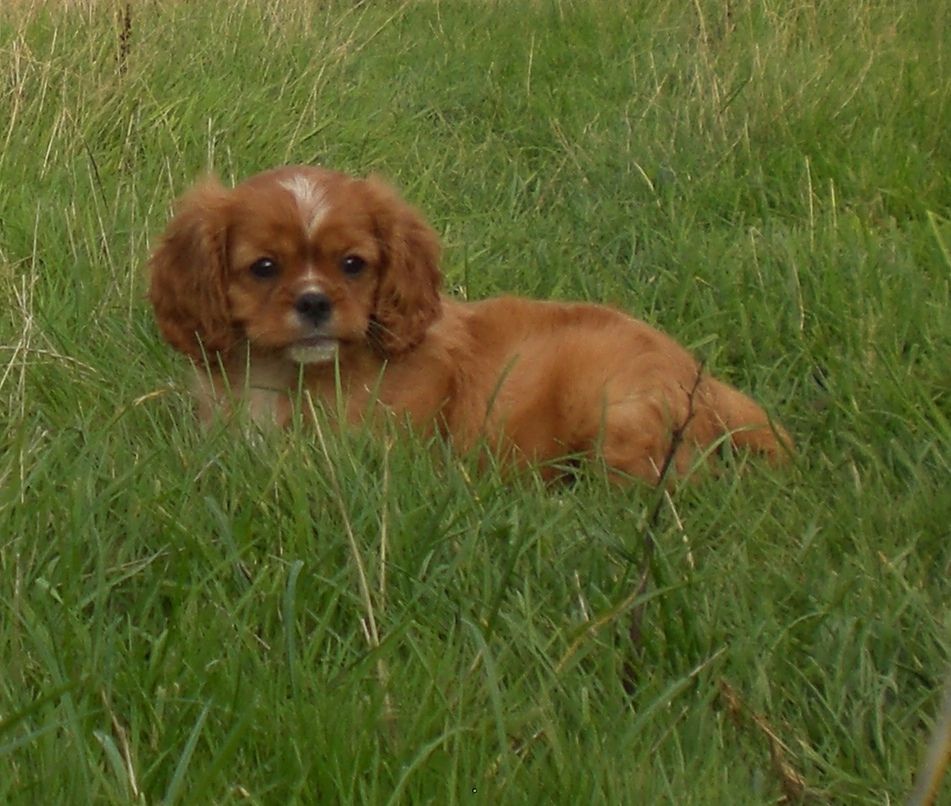 The last picture of Isis, the day she left for her new home
The following year she was mated again to a Blenheim dog with an impressive pedigree who belonged to the owner of Milly’s own father, Nemo. Again only one puppy resulted, a black and tan dog who I called variously The Black Knight, Sir Einstein and Monster, depending on how he was behaving that day. 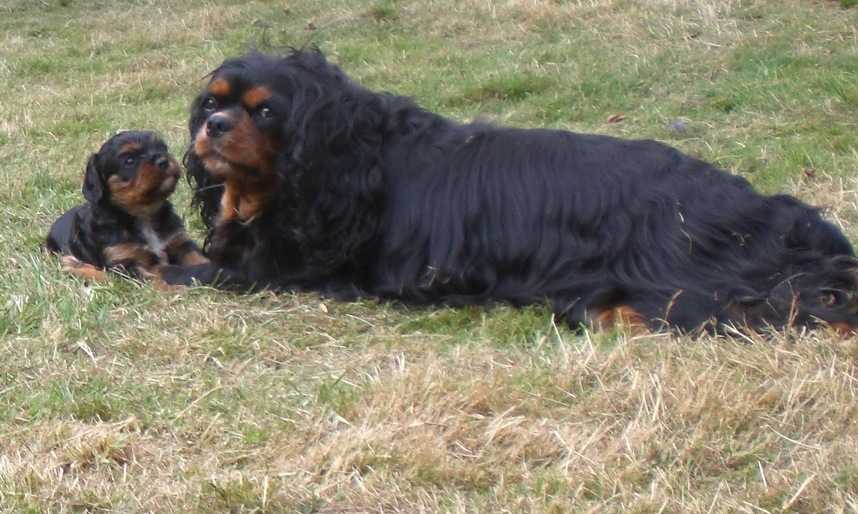 Milly and Herbie aged 4 weeks
Eventually his new owners called him Herbie, and he went to live with them in Chiswick.

Herbie aged 6 weeks
Cleo was as devoted to him as she had been to Isis, and would guard him assiduously in the garden when Milly had run off somewhere else to play.
In 2015 Milly acquired a new friend, a tricolour bitch called Poppy. Cleo had become increasingly sedate on walks, but now Milly had another dog to race around and play with. As Poppy grew to adulthood, they became fast friends.
In 2016 Milly was mated to Alfie, another handsome ruby dog who lived near Glossop in the Peak District. This time I counted up the days of her season correctly, and in June she whelped 6 beautiful puppies, 1 black and tan and 3 ruby dogs, and 2 black and tan bitches. 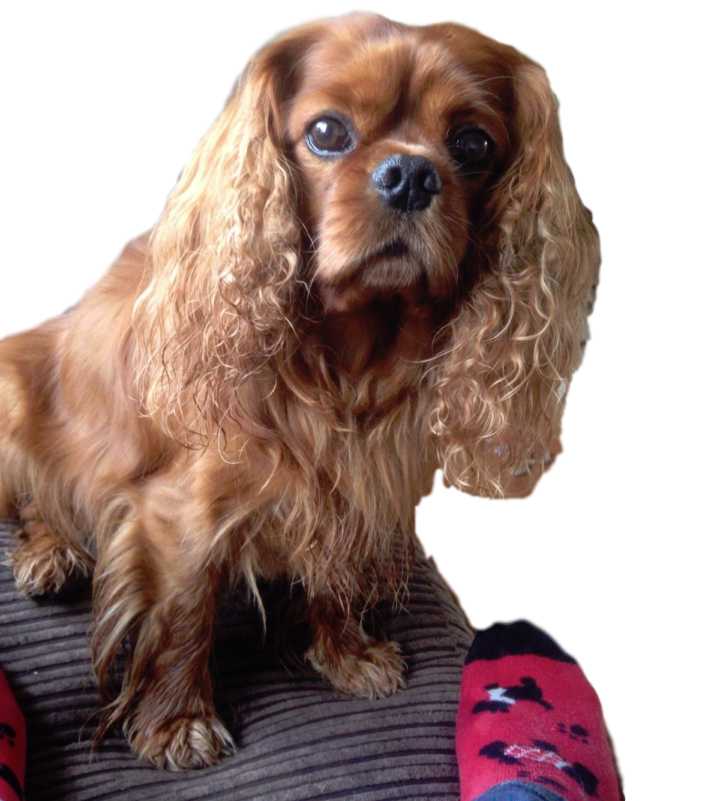 Brooksbur Fire Light Fox – “Alfie”
Alfie was very handsome, but like Milly, a bit of a Mummy's dog
Milly began whelping after 11 o’clock, and the last puppy was born just after two in the morning. All the puppies were strong and healthy, and thrived from birth.
Milly with her one day old puppies
At first she won't leave the puppies voluntarily; so she has to be carried outside to give her a chance to relieve herself, before rushing back in to check the puppies are OK. 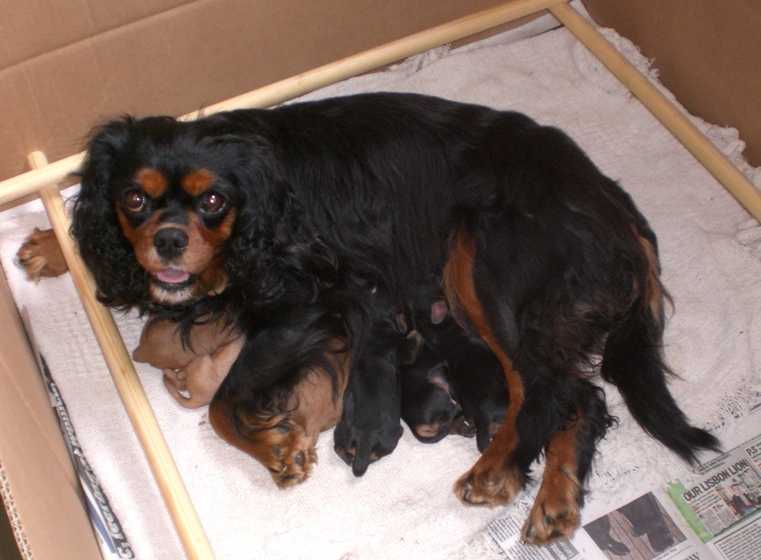 Being summer puppies, they spent a lot of time outside; which made them easy to for their new owners to housetrain.
[envira-gallery slug="third-litter-puppies"]
The puppies aged 7 weeks
They went to homes all over the south-east, with one going to Worcestershire.
Milly has now returned to a life of leisure and long walks, but her family is not yet complete. I hope one day to have a ruby daughter of hers to keep.
Milly was mated with Alfie again in the spring of 2017, but no puppies came, so we returned in October to try again. After resorting to a blood test, it turned out that her fertile period was the 14th, 15th and 16th day of her season. This is later than average, and assuming it was her normal pattern, might explain why she had twice had singles. 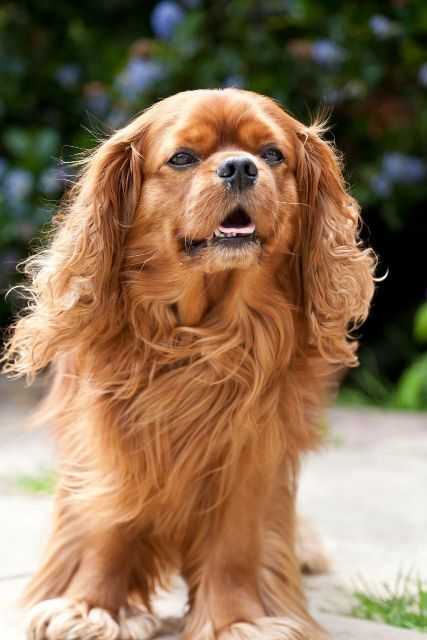 Alfie
By the weekend before the end of her 5th week, she was already looking fat. At exactly 5 weeks, she was puffing like a steam train on returning from a very modest walk. Two days later I emailed my expectations to Alfie’s owner. Milly was already showing mild signs of discomfort, and found the kitchen floor slippery with the extra weight and her increasingly awkward shape.
Milly grew bigger and bigger, and ended up the size of a tub. On the night of 6th – 7th December, she kept me up until 3 in the morning, thinking she was going to whelp. On the 7th we went for a short walk, and she seemed more like her usual self. She spent the evening in the same way as the previous one, except the panting was stronger, and she threw in a bit of digging.
By the early hours, it was clear she was entering serious labour. But she wouldn’t settle in the whelping box, instead going from bed to bed and room to room, hour after hour, until eventually she decided she wanted to be in the kitchen. The first puppy, a black and tan bitch, was finally born just before 4 o’clock in the morning. Milly gave birth to her standing up; she was too big to lie down.
The last, a ruby dog, came at quarter past nine. There were 7 of them. Among them was the puppy I wanted, a beautiful solid ruby bitch, Amber. Milly had delivered what would be her last litter of Cavaliers.
[envira-gallery slug="milly-litter"]
Milly with her new puppies
The puppies were a good size at birth; and 4 of them thrived and grew well. I watched over the smallest in the litter carefully, and after a few days it was clear she too was doing well. But the other two did not. They didn’t seem to suckle well, and were easily pushed aside by their bigger littermates. The more this happened, the bigger the disparity in size and suckling ability became.
For nearly 4 weeks I watched anxiously over the two small babies, making sure they had regular, unimpeded access to the milk, encouraging them to suckle, trying to supplement their diet with powdered milk. Several times I feared they were not going to survive. At a week old I wormed both, and from then on the ruby boy slowly and steadily improved, growing 20 – 30 grams every day.
[envira-gallery slug="milly-puppies"]
The puppies growing
But the little black and tan girl continued to struggle, sometimes growing a little, sometimes only holding her weight steady from day to day. At 3½ weeks I started feeding her weaning paste, putting it onto her tongue, hoping she would take to solid food as she had failed to take to the milk.
Gradually she started eating a little paste voluntarily every day. She gained strength from the food, and the will to eat more. By the time I introduced the paste to the rest of the litter, she was eating well and enthusiastically. She was still small, but she grew stronger every day, put on more weight, filled out and became a round, happy, healthy puppy. I called her Phoenix, for all the times she had risen from the ashes of hope.
[envira-gallery slug="puppies-at-1-month"]
The puppies at 1 month old
As it was a cold January it was impossible to take the puppies outside, which made it difficult to introduce any housetraining. I was to pay the price later with Amber.
error: Content is protected !!