Rowley - My First Dog
Rowley, born in 2002, was my first dog.
I found Rowley through the local paper. He was born just outside Presteigne, a Herefordshire town that is partly in Wales. Rowley was born in Warden, which is in the Welsh part of Presteigne (the Welsh name is Llanandras).
When I went to see the advertised puppies, I was greeted exuberantly by both his parents, Amber and Bertie, two beautiful solid rubies, both then aged 2. They were bred from the famous (to Cavalier breeders) Salador, Narayden, Homerbrent, Rheinvelt and Harana lines, and had 4 puppies, 1 bitch and 3 dogs.
The first puppy I was shown was sweet but rather quiet. Seeing that we were not completely struck with him, his owner took him back to his mother and returned with another puppy, who ran exuberantly round and round the room and eventually stopped with his paws on my feet. This was Rowley. 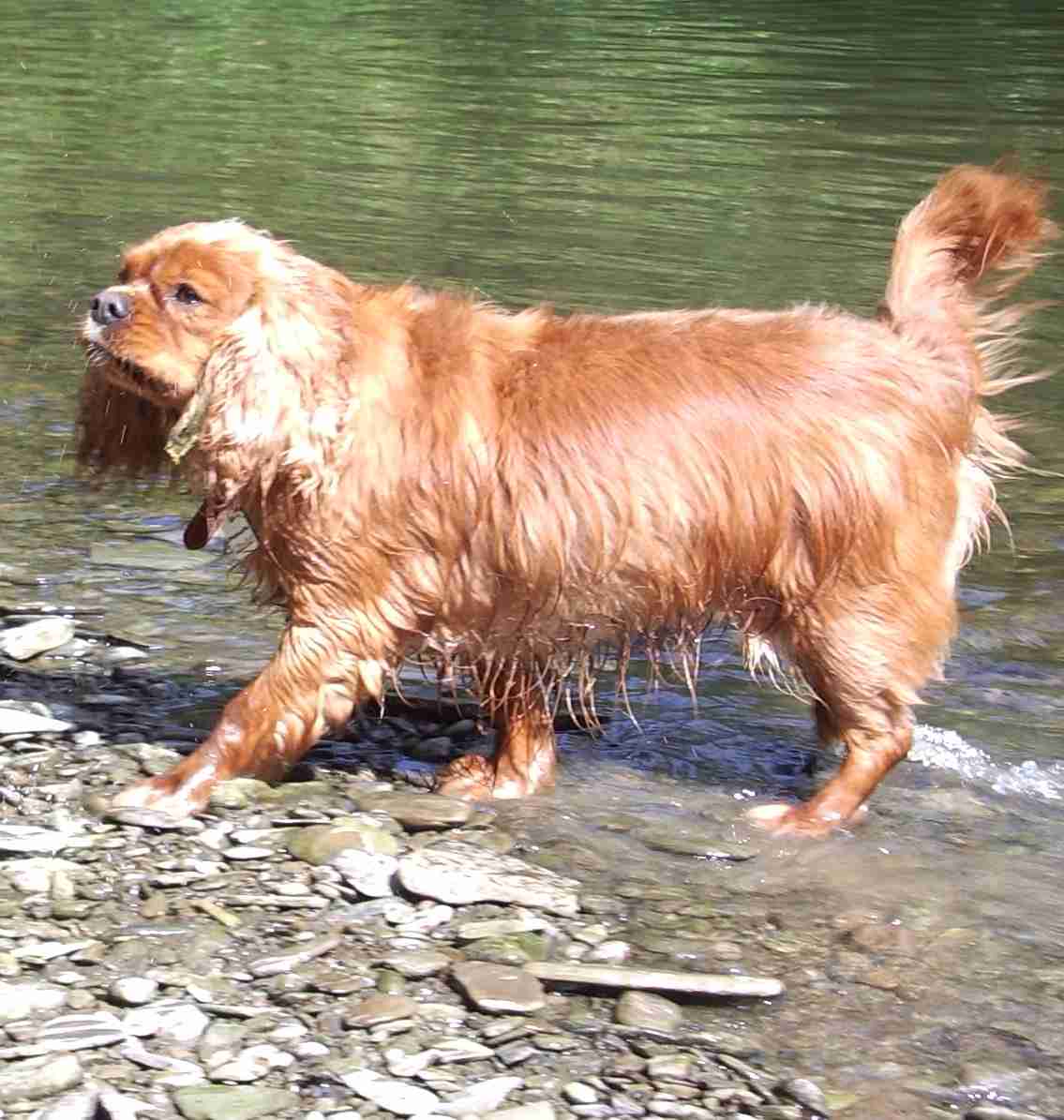 Rowley swimming in the River Lugg beneath Shobdon Hill
There are some animals, just as there are some people, who have such charm and appeal that you cannot resist them. Rowley was such a dog. From the beginning I adored him, and he was simply the best dog. And for rest of his life, he would be the best dog. No-one else could replace him, and no-one ever will.
Rowley’s name was a tribute to his breed’s royal patron, King Charles II. Charles was a man of extraordinarily varied interests: he founded the Royal Society and the Royal Observatory; he commissioned Sir Christopher Wren to rebuild the City of London in the grand style after the Great Fire, he patronised art and the theatre – and he was the first royal patron of racing, at Newmarket.
Newmarket, sited on what was probably an old Roman road built after the revolt of the Iceni (think Boudicea), is now the racing capital of England. The Old Mile at Newmarket, the oldest racecourse in the country, is traditionally known as the Rowley Mile; it is the course over which the two Guineas classics are run every year, early in May.
Rowley – the original Rowley – was an especially prolific stallion in the 17th century royal stables, and the King liked to use the moniker “Mr Rowley” when making his private visits.
Rowley (my Rowley) had not been housetrained. Even though he was born in April, so he could have been outside since he was 4 weeks old, he had been living in a sandpit, in which he had become accustomed to relieve himself. Consequently he was not easy to housetrain – in fact, not until Amber (who was born in the winter) was I faced with another such trial in this department.
About a month after Rowley came, he acquired a friend. Tigga was a Parson Russell terrier, but unlike Rowley she was ultra-sensitive and very highly strung. By the time she arrived home, she had been sick multiple times, and when she came out of the car she was terrified by the loud barking of the neighbours’ dogs. I brought Rowley out of the house to meet her, and from that moment she loved her happy, friendly, confident canine friend. Tigga would lie on top of Rowley, with her legs pointing to all four corners, and for the rest of his life Tigga considered him to be hers exclusively. 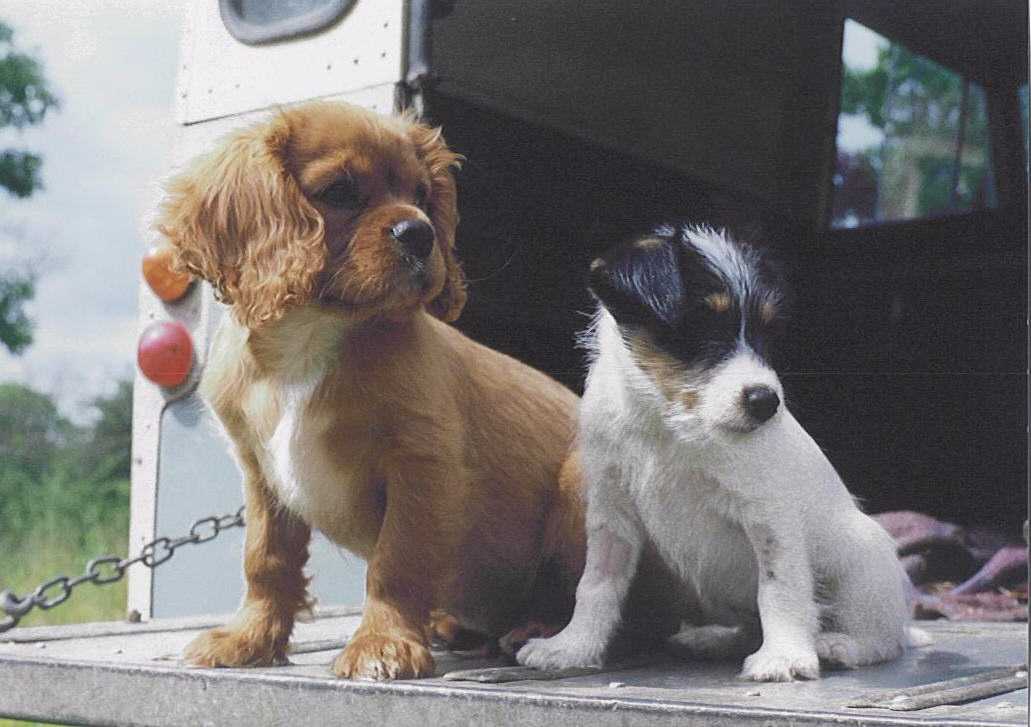 Rowley and Tigga, aged around 14 and 10 weeks
Rowley and Tigga had a game.
Tigga was taught early to chase and retrieve sticks, and like most terriers, having learnt the game, she quickly became obsessive about it. Rowley would try to frustrate her, by crouching in front of her when the stick was thrown, and preventing her chasing it. It gave them hours of fun together.
In time Tigga had 3 litters, and 2 daughters who remained with her, but Rowley remained her first love. Tigga, who as I write is rising 15, became grumpy as she grew older. When she visited us she would sit next to Rowley, baring her teeth and growling softly at anyone who tried to approach them.
It wasn’t long before I starting wanting another Cavalier. Sheba, my next dog, came from the West Midlands, and she joined our family in 2003, a year after Rowley. She was joined 2 months later by her aunt, Cleo.
In the same year we acquired the first 8 ewes of a flock of Ryeland sheep, five of whom had lambs at foot. Rowley soon adapted to the newcomers, but Tigga was less welcoming, and the following year she killed a newborn lamb by biting its neck and severing its spinal cord. After that, she was kept away from the young lambs.
A year after Tigga had her second litter, the Cavaliers and the terriers became separate families, but they remained friends and companions. Tigga found the parting from Rowley hard, and became moody and grumpy.
Rowley’s favourite thing was to go out with me in the car (or land rover). At the first chance, he would climb inside and wait hopefully (for hours, if necessary). Sometimes he became so carried away by the thrill, he would even bark (he had deep, masculine, rarely heard bark). Above all he loved to sit next to me on the passenger seat. Unlike Milly, who was desperate to get out at the other end and walk, he was quite happy to stay there, and wait for me to return. He did love his walks, but above all he loved going out in the car. 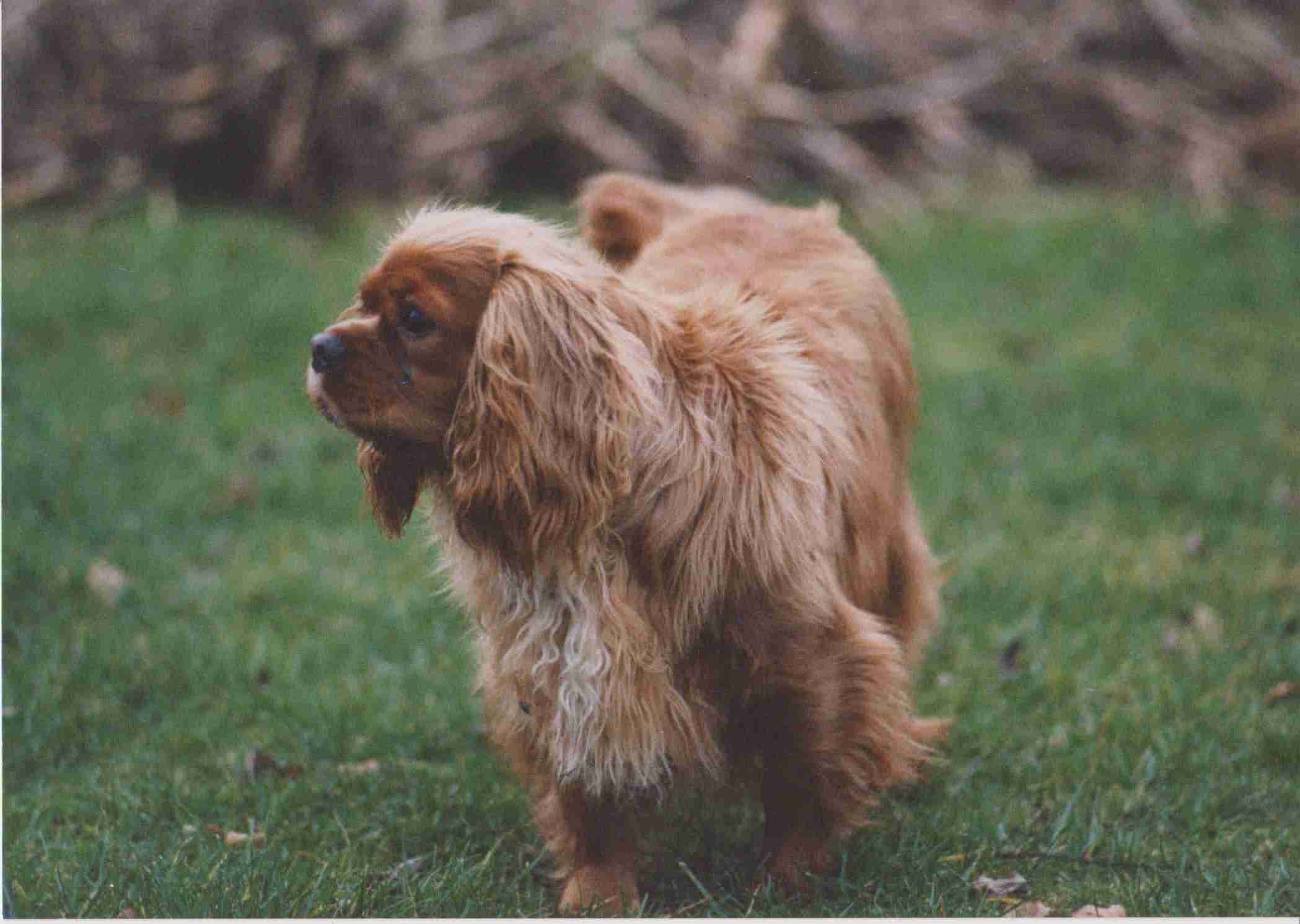 Rowley aged about 2 or 3
Rowley’s distinguished breeding didn’t protect him from the scourge of Cavaliers, MVD (mitral valve disease). He was first diagnosed with a slight murmur when he about 6 or 7. By the following year the murmur had become a thump. He was particularly unlucky in that both sides of his heart were affected, which meant he suffered badly from fluid retention, and gradually became thinner.
By the time he was 9 he was on 4 types of medication. He still enjoyed his walks, often on Shobdon Hill, almost to the end, doing his last one 6 months before his death. On the day he died, I rang the vet, very concerned because his mouth was already cold. I feared for what it meant, but the vet was busy with the morning’s surgery, and by the time he was able to ring back, Rowley was dead. It was 11 days before his 11th birthday. 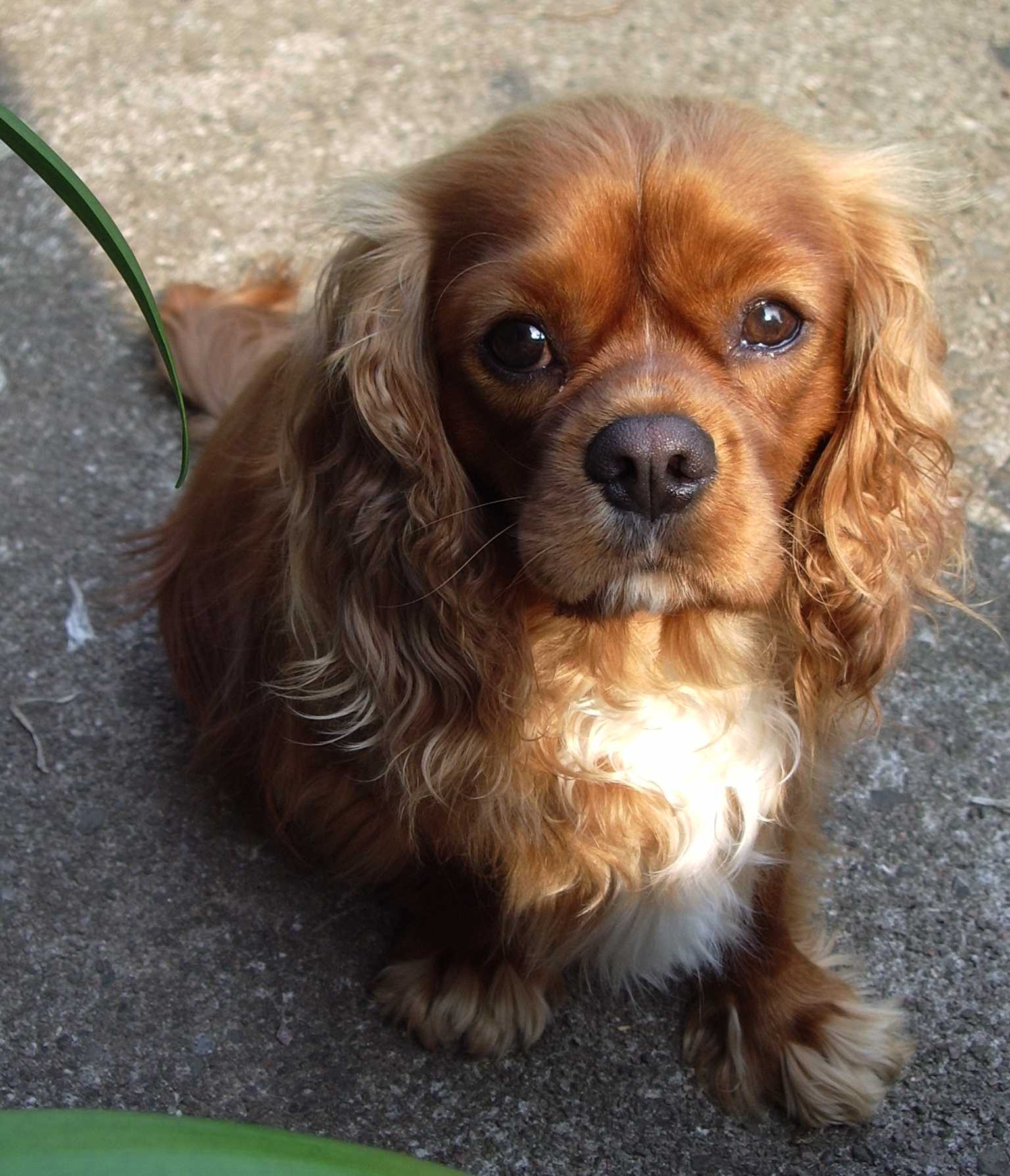 Rowley
The Best Dog
24 April 2002 – 13 April 2013
I buried him in the garden, and planted a lilac above his head to flourish in his memory in the years to come. Cleo, who had lived with him her whole life, was devastated; and wouldn’t eat that night. For the next month her eating remained erratic. She was never quite the same again.
Tigga too has now crossed the rainbow bridge, about 3 months after her 15th birthday. She left a daughter, Tabby (her elder daughter, Binky, had been put down earlier with cancer). Tabby still visits us regularly for holidays.
error: Content is protected !!