When I mated Cleo with Nemo, his owner warned that he would never breed particolours. So now I had my line of beautiful wholecolours, but there would be no more Blenheims or tricolours. So in 2015 Poppy, a tricolour bitch from Minehead in Somerset, came to live with us.

Poppy had been named “Bell” at birth, so at first I called her Bella. But at home she soon became Poppet, which eventually morphed into Poppy. Later, for reasons hard to explain, she acquired the nickname Pudding; although any dog less like a pudding couldn’t be imagined – she is very lean and fit. 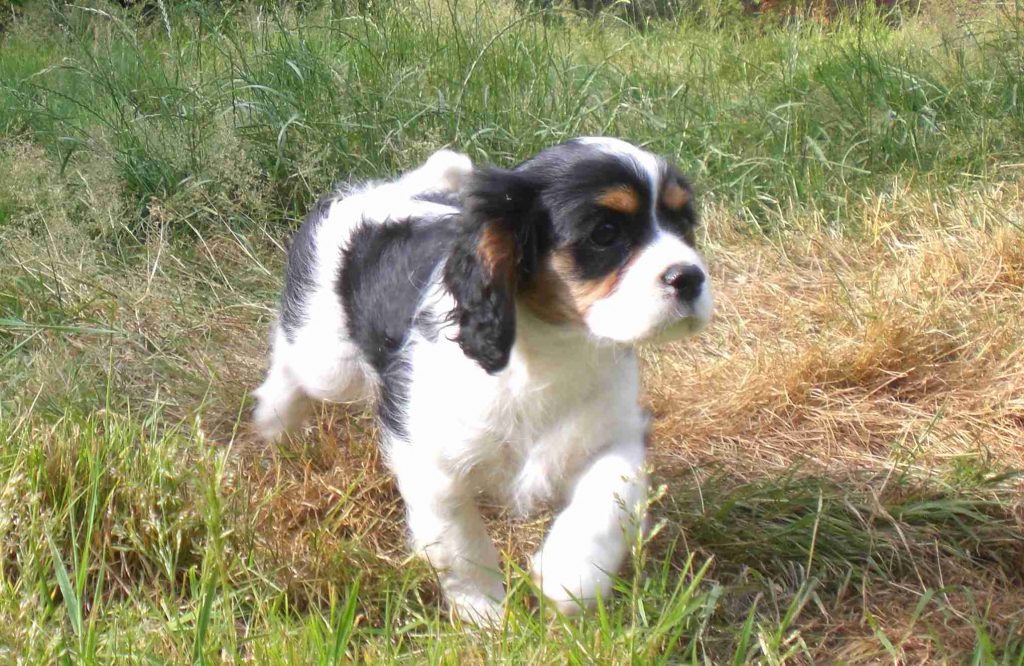 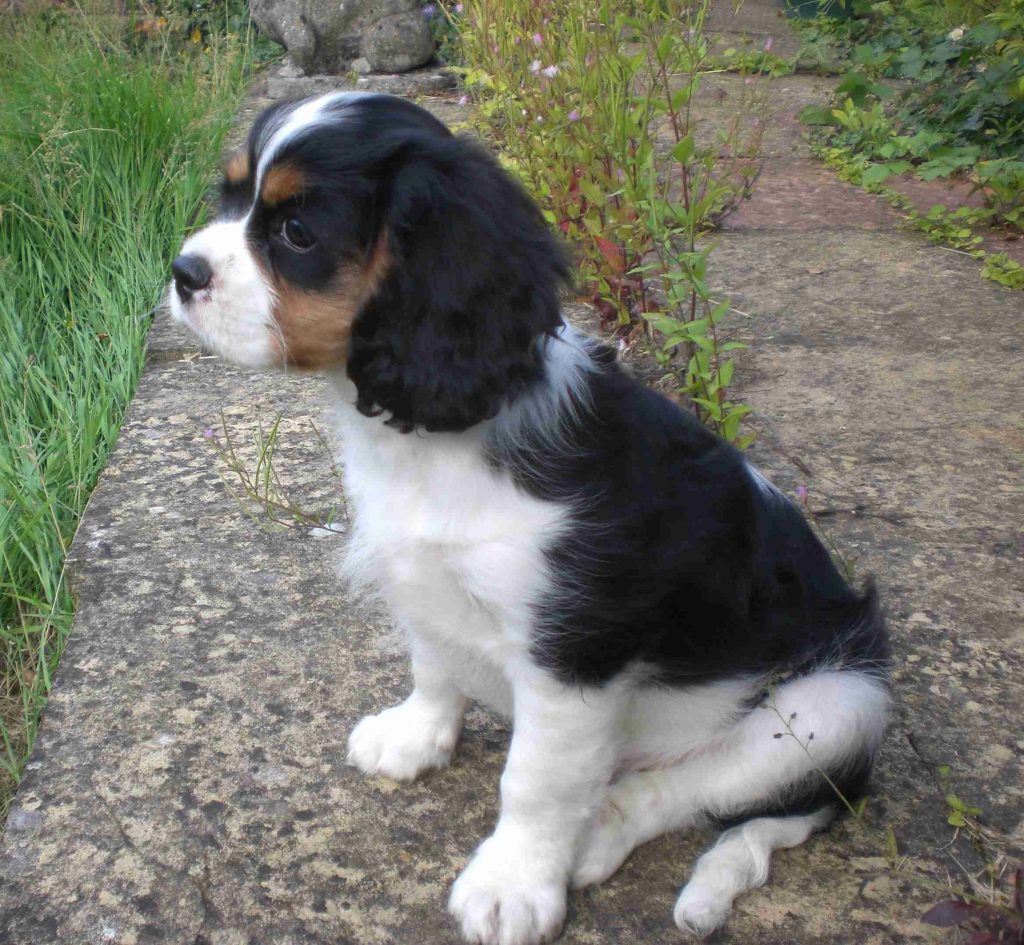 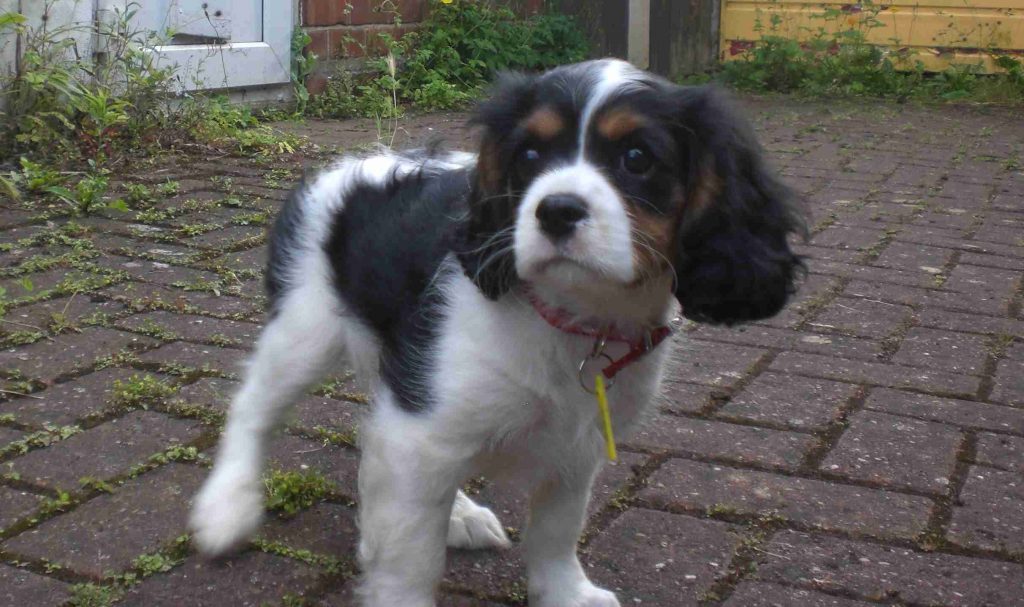 Poppy in the early days, aged about 12 weeks and looking adorably pretty and cute

Poppy was very sweet, having an endearing habit of coming to sit on my feet whenever I stopped moving for more than 5 seconds. But it did make her prone to being trodden on, and in time she developed a new way of commanding attention, by balancing on her hind legs for astonishing lengths of time. I hope one day to get a picture of her doing her party piece.

She was also naughty from the start. On our first walk by the Oxford canal, she tried to jump onto a narrowboat and fell into the canal. Later she jumped into the canal and paddled furiously after some mallards, who sailed serenely on and then flew away. It turned out that she has a passion for chasing birds. She also has a lousy sense of direction. 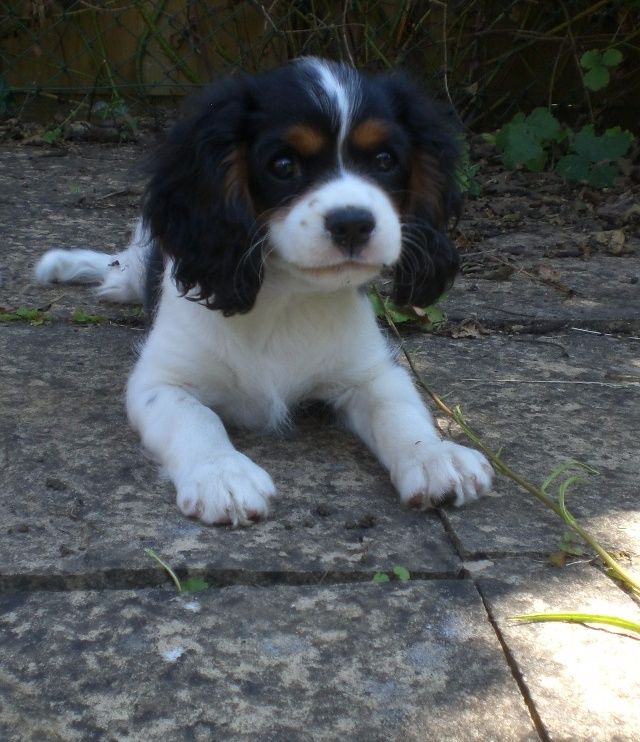 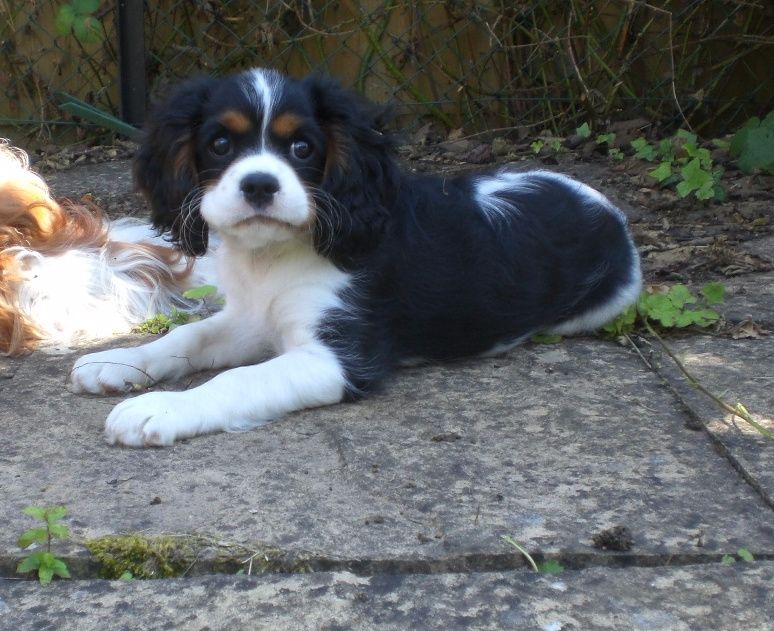 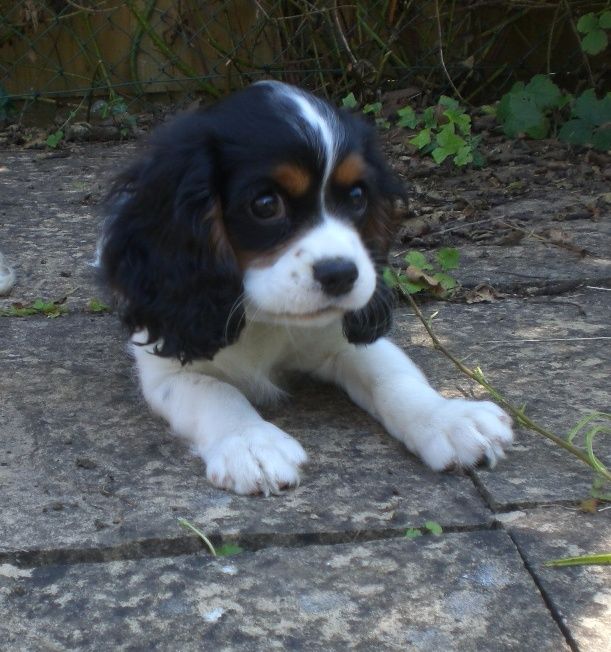 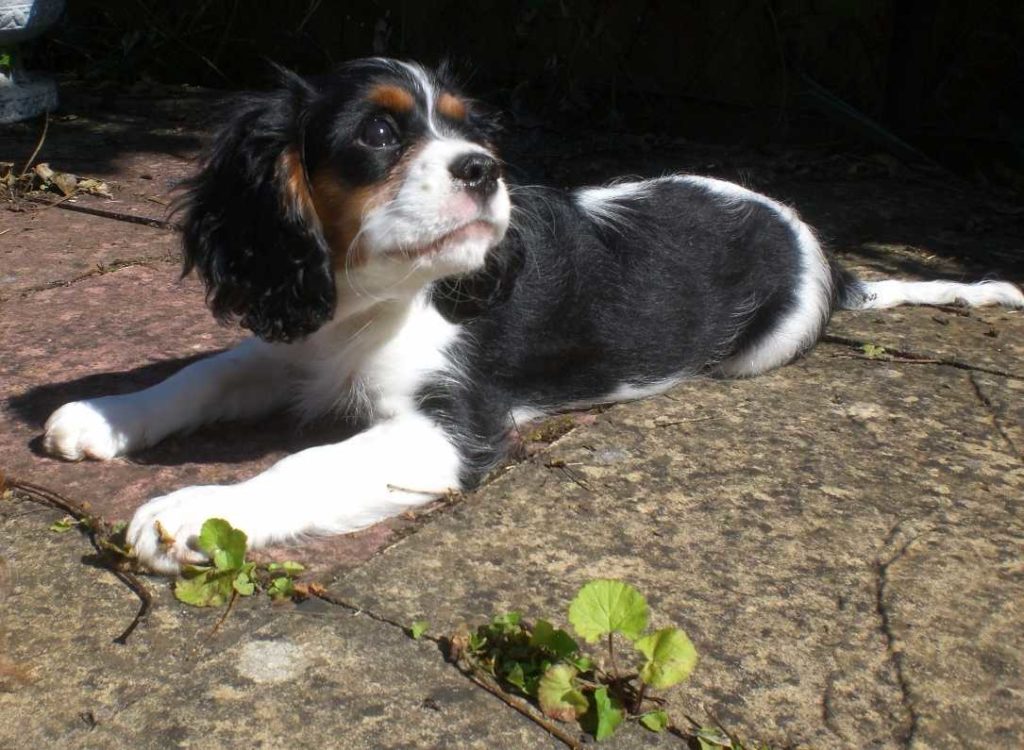 Poppy as a teenage puppy – and already a beauty

Shortly after that, she and Milly ran off over one of the canal bridges to explore. Milly soon returned, but Poppy was unable to find her way back, and despite all my gesticulations, couldn’t work out that she should return the same way she went (as I said, she has a lousy sense of direction). Eventually I set off over the bridge to retrieve her, but when I disappeared from view she panicked and jumped into the canal to swim back to us. I had to rush back and haul her out for an emotional reconciliation.

All spaniels are bird-chasers, but Poppy soon became obsessive about it. I began to fear that it was becoming impossible to allow her off the lead; something I would greatly regret as I firmly believe the whole point of walking with dogs is to give them the chance to run around, let off steam and enjoy themselves. Eventually she began to learn that she belonged to her pack, and that meant staying (reasonably) close to it.

Poppy, who will be two in the spring, is still at the beginning of her life. After a trying (to me) autumn which she spent chasing pheasants and getting lost, her behaviour on walks, and her sense of direction, is gradually improving.

She and Milly have great fun together. I think I will always remember them as a pair, just let off the lead, racing off into the distance side by side, their long black ears flapping.

Once she was 2, and having grown into a real beauty, I was keen for Poppy to have some puppies. This proved more troublesome than could be imagined.

Poppy has proved to be the Queen of the slip-mating.

Despite finding her a divinely handsome mate; Poppy, who is an absolute sex-fiend at home, somehow lost all interest in it when confronted by a real boy. In her first mating in May 2017, she managed a brief tie (less than 5 minutes) on the second attempt. At the return visit in October, both attempts were slips.

By this time Poppy had matured and I was sure she would make a great mother. She had finally learnt the limits of her freedom on her walks (i.e. not running 3 fields away within 30 seconds of going off-lead). She had good recall, and only indulged in the occasional lapse when the pheasants were particularly enticing. The days when I would end up cutting a walk short because I was so annoyed by her waywardness seemed to be past.

She and Milly were devoted to each other, and the greatest of friends. But neither seemed keen on the prospect of motherhood. Perhaps they were just having too much fun to want to bother.

During her 2018 season Poppy, by now aged 3, was blood-tested and the result suggested she should have ovulated shortly after the blood was drawn. However, the subsequent mating was once again barren.

Following further investigations into dog mating and breeding, I have started to wonder whether Poppy’s seasons are anovulatory; in that she fails to ovulate. This would explain both her failure to become pregnant, and her failure to tie properly when she is mated. When she has her next season, expected shortly, she won’t be taken to the dog unless her blood tests show that she has definitely ovulated.

After more trials and tribulations (and another unfruitful mating) a blood test finally confirmed beyond doubt that she was ready for mating. I took her to the boy two days running, and my regular stressful journeys up the M6 finally bore fruit: Poppy was pregnant.

We had begun the second phase of problems attached to persuading Poppy to embrace motherhood.

George, Poppy’s pin-up boy and father of her litter

Poppy’s pregnancy was uneventful, but it was clear the litter she was carrying was small. I estimated there were 2 or at most 3 puppies there. All went well until labour began, which Poppy seemed to try to resist.

It was clear from the shape of her stomach that the puppies had moved to the birth position, but the labour did not progress further. The puppies were evidently pressing on her bladder as she was unable to control her urine, and they ended up being delivered by Caesarean section. But the problems didn’t end there. The next day Poppy was back at the vets having a vaginal cyst removed.

It was clear that motherhood is simply not her forte.

Poppy with her 2 day old puppies

It took a lot of patience to get her to adjust to looking after the puppies; a lot of this was probably due the surgical birth which failed to stimulate her maternal instincts properly. There were two puppies in the litter, a boy and a girl, both tricolours. The boy’s head was very domed in shape, more like a King Charles spaniel, and as he grew it was apparent he was not developing normally. I suspect he was damaged during the birth. At 6 weeks it was clear he had no viable future and the vet put him to sleep. He is buried in the garden.

It would all have been a crushing disappointment but for Tess.

Tess aged 3 weeks (her brother is underneath her)

Tess was more heavily marked than is strictly desirable, but she has the sweetest face and grew up to be the prettiest puppy. Poppy recovered well from the birth and she and Milly (whose Cavapoos had been born 3 weeks earlier) were rewarded with a holiday on Exmoor.

Poppy’s one stint at motherhood was over. One day I hope she will become the granny of a Blenheim girl.